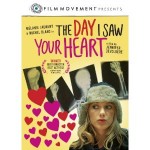 The Day I Saw Your Heart (directed by Jennifer Devoldere and released by Film Movement on 12/4/12) is a French film with English subtitles that was the winner of Best Director and Best Actress awards at the Newport Beach Film Festival. It stars Melanie Laurent as Justine, and Laurent is well-known for the films Inglourius Bastards, Beginners, and La Rafle (with director Devoldere having Laurent in mind for this lead from the very beginning).

Like most families, Eli Dhrey’s (Michel Blanc’s) family has members that don’t get along with each other (societally usually deemed dysfunctional). But one never gets to choose family members, who eventually do need to hear each other. Devoldere notes that in a birthday party scene “Each one seems to be in his/her own little bubble of reality” and “Families are complicated.” This particular family well proves these points, as 60-yr.-old father Eli is having a baby with his new (much younger) wife while his grown daughter Dom (Florence Loitret Calile) is trying to adopt after unsuccessful attempts at in vitro fertilization, and Eli’s other daughter Justine (Melanie Laurent) laments the fact that she will no longer be the “baby” of the family. Eli, who was first a jazz player who travelled the world and later became a wealthy fabrics entrepreneur who now stays at home because he misses his family too much when he’s away, complicates matters even more by trying to make friends with Justine’s boyfriends, past and present, seeking them out and urging each one of them to play golf with him.

Justine, who runs Xrays and catscans for a doctor,

discovers that she has a streak of artistry, putting Xrays together in unique installations on her sister Dom’s apartment picture windows. But Justine argues with her father constantly, and although he’s a generally well-meaning and hard-working man, he makes comments like, “Women aren’t funny. Everyone knows that. Unless they’re fat!” to Justine’s ex-boyfriend, a stand-up comedian named Atom (Manu Payet).

The Day I Saw Your Heart particularly explores absent fathers in the lives of their children (Justine’s father gone while playing jazz around the world, and her new boyfriend never even getting to know his father and being raised completely by his mother since he was two). Justine resents her father’s first divorce, which occurred when she was seven.

Beyond this unusual plot line, in which Devoldere says Justine is the (artist) observer, much like how she observes, too, as a filmmaker, the film has amazing poetic imagery: Justine dressed in blue and black on a grey day in Paris on the street clutching a hot cup of coffee; Justine in a “warm” yellow restaurant with cold rain outside pouring down the sides of the windows; and Justine’s Xrays, including that of the skeletal parts and heart of her father’s body. In fact the inside-looking-out theme is prevalent in many instances in this movie: what is one’s world like in contrast to everyone else’s world or mindset?, much like the Mexican proverb “Every head is a different world.” When Justine sees shots of her father and ex-boyfriend Atom on television (they’re at a tennis match, and she’s on the inside, looking out) she is infuriated. But in the long run she comes to learn just how much her father has cared for her throughout her entire lifetime as the last song of the film is Cat Steven’s (Yusef Islam’s) Wild World (especially the lyrics “and I’ll always remember you as a child, girl”).

What a great film, reflecting to us the complexity and contradictory natures within each individual! I never knew what would happen next, as is often true with all of us in life experiences. Commendable acting performances by all and the touch of iconic movie magic by director Jennifer Devoldere.

Christina Zawadiwsky is Ukrainian-American, born in New York City, has a degree in Fine Arts, and is a poet, artist, journalist, critic and TV producer. She has received a National Endowment For The Arts award, two Wisconsin Arts Board awards, a Co-Ordinating Council Of Literary Magazines Award, and

an Art Futures Award, among other honors. She was the originator and producer of Where The Waters Meet, a local TV series created to facilitate the voices of artists of all genres in the media, for which she won two national and twenty local awards, including a Commitment To Community Television Award. She is also a contributing editor to the annual Pushcart Prize Anthology (and has received one herself), the recipient of an Outstanding Achievement Award from the Wisconsin Library Association, and has published four books of poetry and has had poetry and fiction in hundreds of literary periodicals. She has reviewed music for Music Room Reviews, films for Movie Room Reviews, Movie Scribes, and FilmSay, and is currently reviewing books and films online for Book Room Reviews at www.bookroomreviews.com while also showing artwork professionally.

Spread the love
Tags: The Day I Saw Your Heart