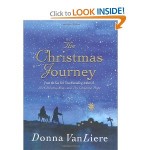 “I wrote The Christmas Journey several years ago for a church banquet. I read it as a narrative then, as a reminder, and still do today. I hope you will do the same,” writes author Donna VanLiere, and what she is asking us not to forget (since too often Christmas has been commercialized) is the very human aspects of Christ’s birth.

The story begins with the reason for Joseph and Mary’s journey, the decree of Augustus Caesar that all in the Roman world be registered in a census for tax purposes in the towns where the people were born, and citizens begin to journey many miles to the towns of their origin, Joseph being no exception on his road to Bethlehem from where he’s been living in Nazareth.

But Joseph is traveling with Mary, who is nine months pregnant and not yet married to him (although promised to him in marriage), and she has been the source of great gossip in Nazareth. Joseph has only seen animals being born before and is hesitant about assisting Mary with the birth, plus wary of how to teach the Son of God how to live on this earth as a child, but Mary reminds him to teach what he knows with love.

The Christmas Journey humanizes the entire situation, down-playing the great Star in the sky that shown that night (but only to the Magi and a field of shepherds) and emphasizing how difficult everything must have been for the couple: no room at the inn and having to give birth among animals, before which Mary rode on a donkey for 80 miles with only a thin blanket around her. The book is tastefully illustrated by Michael Storrings, with an attractive black, blue and gold cover and a color palette for the drawings within the book that allows the illustrations to be symbols rather than to have them dominate the idea of the story. Actually an adult story, this short-in-length book could be read to older children, but only those who are already aware of such facts as a child’s head coming forth from the birth canal in a woman.

Joseph decides that he will teach the Almighty to plane wood in a setting always filled with the smell of sawdust, that he will teach Christ to be a carpenter. And Christ is born “At a birth where there should have been the finest marbles and linens” but there was only dirt and hay. Christ came into the real world as the son of God but also as a real human being, a man.

Unusual for its point of view, The Christmas Journey reminds us that all is not new Wii and X-box games, new Ipods and Iphones, but that Christmas is a remembrance of an important birth, perhaps the most important birth of all time. I highly recommend it, especially to parents, to read during the Christmas season to their children to remind them of that purpose!

The Christmas Journey by Donna VanLiere with illustrations by Michael Storrings, published by St. Martin’s Press on October 26, 2010, 96 pages.

Reviewed by Christina Zawadiwsky
Christina Zawadiwsky is Ukrainian-American, born in New York City, has a degree in Fine Arts, and is a poet, artist, journalist and TV producer. She has received a National Endowment for the Arts Award, two Wisconsin Arts Boards Awards, a Co-Ordinating Council of Literary Magazines Writers Award, and an Art Futures Award, among other honors. She was the originator and producer of Where The Waters Meet, a local TV series created to facilitate the voices of artists of all genres in the media, for which she won two national and twenty local awards, including a Commitment to Community Television Award. She is also a contributing editor to the annual Pushcart Prize Anthology, the recipient of an Outstanding Achievement Award from the Wisconsin Library Association, and has published four books of poetry. She currently reviews movies for , music for , and books for http://www.bookroomreviews.com.