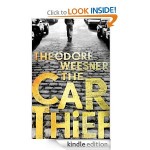 In the new introduction to The Car Thief, which was first published in 1967, Theodore Weesner writes: “‘The Car Thief’ is a novel about juvenile delinquents. Stealing cars. Making self-destructive choices. Messing up your life. Fourteen cars in half-a-dozen endless months. Keeping a car for week or so. Switching plates on dark side streets, and parking three or four blocks from the apartment where you live with your alcoholic suicidal father. Having powerful V-8 engines to control with your hands. Gaining movement, music, boys to impress and girls willing to go for rides.” The novel is autobiographical and the hero of our story, Alex Housman, was abandoned by his mother when he was only two years old.

Weesner names this his “coming-of-age” novel and continues to tell the story of being in a juvenile detention home, getting a GED and eventually going into the army to straighten out his life. “A surprising critical hit, the novel opened a hundred doors and changed my meager life forever. Random House, Book-Of-The-Month Club, Dell Books, editions in England, Japan, Germany,

Romania, a Vintage Contemporary, a Grove Press re-release…..All have had my novel attached to me, and me to my novel, defining who I became and who I remain today. It’s been a dance down through the decades that has kept me going and for which I would like to thank every reader who has entered the pages with me.”

It would seem unimaginable to most of us to have such “careless” parents and then to be thrown in with a group of boys whose parents have been even more absent. Alex adjusts to juvenile detention, at first finding it exciting and different, but later it becomes all fights and boredom. Alex receives a letter from his father which says, in part: “I’m sorry it came to this but living alone now as I am I come to see a

few things I guess I should have seen before. I guess I just took my boy for granted right along and thought you would always just be here when I came home. I guess I’ve managed most of my life to mess up the things around me. I know your mother had about every reason to leave me as she did.” His father goes on to tell him how much he misses him. Alex, who had been reading and thinking he could change his life, “did no more reading; the conditions never became right again.” He misses his brother Howard and imagines being on the run with him. He remembers how, once after Howard had been missing, his father took them out to a dinner of hot dogs and French fries at a Coney Island diner and said to Allen, “You look out for him from now on.”

Released from juvenile detention, Alex has to go to school and stay out of trouble. He likes a girl called Irene Schaeffer and tries to talk to her, and he gets a job delivering newspapers. Finally he steals a car again and leaves it somewhere and takes a bus home. “For moments at a time he felt like himself again.” At a hearing the judge only gives him probation until his eighteenth birthday instead of a much harsher sentence.

Alex caddies at the local golf club and then wants to join the army. But first he wants to visit his brother Howard, who is living with his mother and a man she’s with who doesn’t even want his father in the house. Once there, he decides that “Howard Connell was not his brother” because he feels estranged from his mother’s entire situation. But he does tell his brother that he’s going to join the army.

The Car Thief is the story of a lonely boy, Alex, whose brother is taken away by his mother and who lives alone with a father who is not violent but is rarely “there” for him because of his alcoholism, also literally disappearing for two to three days at a time when on a drinking binge. He asks his father to sign papers that would allow him to go into the army, but his father decides to leave this earth through suicide and Alex finds him. The Car Thief is compelling and compassionate, as we identify with Alex and his loneliness and wish him well. Finally, after his father dies, Alex joins the army and is saved by its structured way of life. Eventually he (in real life, Theodore Weesner) graduates from the Honors College at Michigan State University and publishes fiction nationally as a graduate student at the University of Iowa’s Writer’s Workshop.