Life, In Spite Of Me Book Review 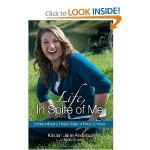 This is what Kristen Jane Anderson was thinking:

However, this is what Kristen was thinking before she threw herself across some train tracks (with a train approaching) one evening. Later she found out that 33 freight cars had driven over her legs at 55 miles an hour.

She should have been dead, but she wasn’t. Her legs were severed, one above and one below the knee, and she would need prosthetics to walk in the future, or else use always use a wheelchair. But she was still alive.

Leading up to Kristen’s suicide attempt (which she didn’t remember for months after the event) were the deaths of her beloved grandmother and 3 friends, a rape (in which the perpetrator threatened her, so she told no one), and finding out that there had been clinical depression in members of her father’s side of the family, as he too became depressed. All of this long before her high school graduation!

The saddest part of this book is the time period leading up to that nearly fatal night. Why hadn’t anyone noticed Kristen’s deep fears and confusion? Why didn’t she tell anyone that life was so unbearably hard for her? Why did she have nothing to turn to but drinking at parties?

Kristen believes that a large part of her recovery had to do with finding a new Christian spirituality, as she began to realize that she could help other people, not just as a social worker, as she first planned, but with her own ministry (she’s now the head of Reaching You Ministries). After time spent in hospitals, psych wards, surgeries, and struggles with her first painful and inadequate prosthetic legs, Kristen was finally baptized again and found herself reborn. Her mother and other members of her family followed suit. Asked to appear (for 8 minutes!) on the Oprah show, she later received an email from a young man who said she’d saved his life. He had a gun and was going to ill himself but saw her on TV and decided against it. About this incident she writes: “The story I had once been ashamed to tell was now giving people extraordinary hope. Only God could do that. My story helped save another person’s life – only because God first saved mine.”

Kristen is now almost happy because the “accident” occurred, because it eventually changed her life for the better. So many people wanted to hear her story that she began doing speaking engagements all over the United States. Her pride at having saved at least one life propelled her to do more and more, including writing this book.

Life, In Spite Of Me is unique in that Kristen offers letters of solace, wisdom and comfort (words she wished someone had said to her) to the

general public at intervals throughout the book immediately after relating various parts of her trauma. Her mother writes an epilogue from her own perspective, and we the readers are also given a list of the signs leading up to a potential suicide and told what what we should do in that situation.

Kristen Jane Anderson is a brave soul who could have spared herself public exposure by ferreting away her life’s secrets, but in revealing them to us she’s shown others bright paths to love and hope. Very uplifting, and a life story that I’d recommend to anyone.

The Summer We Found the Baby; Amy Hest

You Can See More From Up Here by Mark Guerin