SEARCH BOOKROOM REVIEWS on Bookshop
Stella and the Timekeepers
M. Shawn Petersen
2019
ISBN:  9781582706788  (pbk)
ISBN:  9781582707136  (hbk)
ISBN:  9781582707082  (ebook)
Beyond Words Publishing
307 pages
This is a story of pure imagination and ‘Stella and the Timekeepers’ written by M. Shawn Petersen shares creative ideas on how the becoming of an angel.  The main character of Stella Meriss has been through a lot during her life and her adventure continues when she is picked to learn the LOU.  She makes friends so that through a few to many lessons she has learned and will be learning will help her against Lord Sylvain to keep her and her friends together.  This is a story of mythical characters that one must believe in one aspect over another. 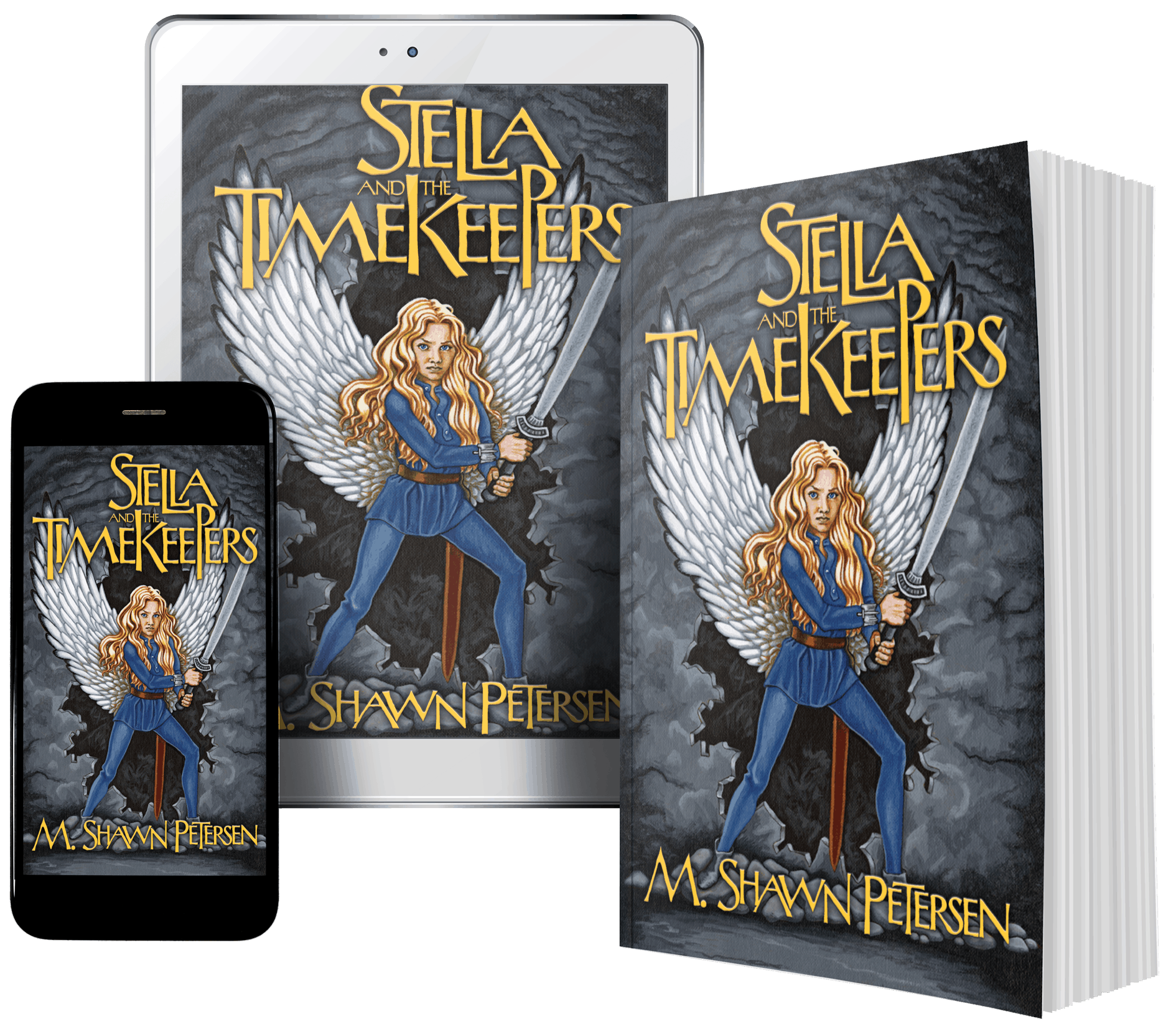 There were many favorite scenes and my first was on page 28 with the list of the seven laws of the Universe, because life is about how we all make our necessary decisions.  The novel also shows that life is a puzzle with many lessons to learn and Stella learns hers.  Another scene is on page 118 when Stella finds out she will have ‘all knowledge’ along with raising consciousness and awareness.  This is also a story of learning who you are as Stella learns who she really is in her life.
‘Stella and the Timekeepers’ is a novel that could be a story to start a discussion on various mythological characters (beings).  Another possible lesson that could be taught could be a beginning Physics lesson or even a literature lesson on cause and effect and moving on from there.  One question or even two could be “Is what Stella is living really possible?”  and “Do you, the reader, believe that these characters really exist realistically or metaphorically somehow?  Answers will vary, but some characters could exist for real in various contexts.  M. Shawn Petersen and the novel ‘Stella and the Timekeepers’ will have readers rethinking some aspects of science, myth and life.

Stella and the Timekeepers Summary

Stella Merriss has never felt like she belonged anywhere–her family was always on the run. During a daring escape her parents suddenly disappear into stormy, shark-infested waters. Alone and unsure of her future, she learns the truth: that she’s actually half angel, half mermaid. Stella has no choice but to join an elite angel apprenticeship program where–despite having to hide her dual nature–she finally feels as though she has found a home.

But villainous forces are gathering to strike against Stella’s newfound home and attack the three Timekeepers who spin and weave the fateful Thread of Life. Evil Lord Sylvain and his army will stop at nothing to corrupt the Laws of the Universe and bend them toward his own vile agenda. A child of land, sea, and sky is the only obstacle standing in his way.

In this epic battle between good and evil, Stella and her friends must defend against the armies of Lord Sylvain or see the realms of land, sea, and sky plunged into chaos.

M. Shawn Petersen has always been a storyteller—as soon as he could talk, he began creating stories. Although he always aspired to be a writer, Petersen first opted to travel the world, spending long stints in Mexico, Guatemala, Canada, and France, giving him the opportunity to learn both Spanish and French along the way. Infected with the travel bug, he became a flight attendant, allowing him further opportunities to travel the world.

After reading The Secret, Petersen began working deliberately on creating a better life for himself and returned to his early passion of storytelling. His first novel, Stella and the Timekeepers, is the first in a series. He currently enjoys his time divided between Portland, Oregon; San Francisco; and Los Angeles.

The Dybbuk’s Mirror by Alisse Lee Goldenberg – a Cover Reaveal