SEARCH BOOKROOM REVIEWS on Bookshop
The BOOK of SPELLS
—
By   John J. Miller, MD
Medieval fantasy that really makes one believe in fantasy as realism. John J. Miller, MD has written ‘The Book of Spells’ that will make you think that you can recite the various incantations that he wrote in the story. This is the story of Malecar, a wizard, of the Kingdom of Vilgar and his study of the Dark Arts and family duty. He learns how to protect those who are close to him. 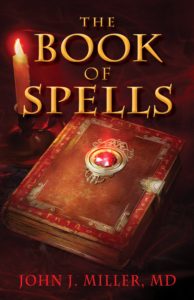 The Book of Spells poses the question how can magic work for all?

‘The Book of Spells’ is a novel that could start various  discussions on English history. My favorite parts are the magic spells in Latin for they were kind of fun to say for I knew a little of the Latin words and were able to translate them. John J. Miller, MD wrote the novel will many well written illustrations. The scene that I liked was when the ‘grixler’ was created for this was one of the scenes full of descriptive words. A classroom teacher could use the Latin words and connect them to the English equivalent. “The Book of Spells’ is definitely a story for young and old alike.
The Book of Spells’ could also start many discussions on diversity for wizardry is a part of some cultures of the world.

SEVENTH CENTURY SOUTHERN ENGLAND. A KINGDOM RULED BY A KIND AND GENEROUS KING. THREE SISTERS WITH A BOOK OF SPELLS. A WIZARD GROWING MORE EVIL BY THE DAY …Transporting the reader back to Southern England into the midst of the seventh century, THE BOOK OF SPELLS takes readers to the Kingdom of Vilgar, governed by a generous king in whose household an evil wizard has positioned himself.Convincing the king that his powers of magic and premonition will benefit the kingdom, Malecar becomes the court wizard, surreptitiously studying the dark arts in his quest to rule over the kingdom.When Martir, a kind and gentle wizard arrives, he is appointed Malecar’s apprentice and becomes a close friend and confidant of the king’s son, Audric.The forest bordering Vilgar is a refuge to three witches. The women are in possession of a book they cannot open. Dabbling in the dark arts so that they might protect themselves, they realize that the book may contain the darkest of spells.Confronted by Malecar, the sisters give him access to THE BOOK OF SPELLS, and the evil within him allows him to open it.What happens when an evil wizard has access to powers beyond his wildest desires? Or when a gentle wizard becomes his nemesis and the only protection for the Kingdom he serves?Working its magic on young and old alike, THE BOOK OF SPELLS will carry readers to a time and place where magic is the norm, where good and evil are at odds, and where maybe—just maybe—the gentle are stronger than they ever imagined they could be.