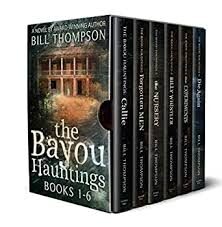 Book 7 in the Bayou Hauntings Series

BY Bill Thompson   Spirits, seances, murder these are the things that make a perfectly thrilling horror story.  Bill Thompson has written ‘The Bayou Hauntings The Proctor Hall Horror’, which is book seven of the series.  This is a story of a family bereft of insanity in many forms. The main characters of Noah, Julian Girard, April, Marisol, Cate, Landry Drake, Henri, and Marguey and ME.  All of these characters are intermingled in the story. All of these characters came together to seek answers try and solve a long ago unsolved murder.

This is a story that starts out as a college project in Julian Girard’s class about Louisiana Culture.  Julian, the professor of this class assigns (signs up) small groups to write papers on various haunted

plantations across Louisiana, and the investigations begin.

There is mystery and death till the end and we learn many things about life and death and very different personalities that people may exhibit in extreme cases.  My favorite parts of the story were right at the beginning with Marguey and ME on the banks of the bayou and Proctor Hall and the scenes of the seances. I even liked at the beginning when Julian was ‘teaching’ his course and following class discussions and finding out the who’s who of the classroom and setting up the groups as some professors do in real classrooms.    Bill Thompson is a fantastic writer that shows and tells what is going on throughout the book for readers will be able to visualize all the happenings that occur even though there are no illustrations in the book.  This is a novel that will scare you for at times the scenes you will think you hear the spirits even the ones the characters do not speak to during the seances.  Bill has written a story that will scare you, and then you will rejoice in the end.

Proctor Hall is one of Lafourche Parish’s oldest sugar cane plantations. After Noah murdered his parents and little sister in 1963, he went away to an institution while caretakers maintained the place. Twenty-six years later the man who never spoke returned home. A girl disappears and people believe Noah’s up to his old tricks.

Four college students visit the now-abandoned farmhouse as part of a class project. They fall victim to whoever – or whatever – still resides within its walls. Famous paranormal investigator Landry Drake conducts a séance there, uncovers long-hidden secrets and learns that the horror of Proctor Hall is still at work.

The 7th installment of The Bayou Hauntings, The Proctor Hall Horror, was released on October 1—just in time for the spooky season. This classic ghost story tries to uncover the mystery of Proctor Hall. Back in 1963, a 14-year-old boy was found alone in the house and speechless as his family members sat decapitated on the couch. He was charged with their murders and released decades later. When another tragedy strikes Proctor Hall as university students investigate the mysterious house. Can Landry Drake and his team unravel the secrets in Proctor Hall before its next victims?

The Bayou Hauntings has won numerous awards. It all begins with best-selling Callie, a ghost story set in Louisiana’s Cajun country. Then a rookie deputy turned paranormal investigator — Landry Drake — searches the bayous for answers to mysteries, hauntings and eerie phenomena. Follow Landry and his team as they learn secrets behind the walls of old mansions and in long-forgotten cemeteries. Books in this bundle are: Callie; Forgotten Men; The Nursery; Billy Whistler; The Experiments; and Die Again.