Set in modern times, The Arlington Orders by author Elliot Mason uses the Dahlgren Affair and the Lost Confederate Gold as a jumping off point for a fun, mystery/thriller adventure. His complex and multidimensional characters must race to find the lost Confederate Gold that, to this day, has never been found.

Now I must admit, of all the books I have read on the American Civil War (and that’s a lot) I have never heard of the the Dahlgren Affair or the Lost Confederate Gold. Fist thing I did was to research both and what do ya know. I found writings on both of these tidbits of history. 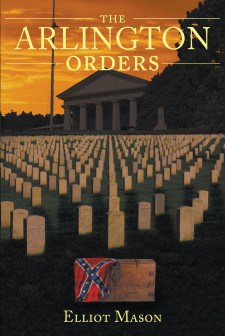 So as the story goes, towards the end of the war the Union Army was closing in on the city of Richmond Virginia.   Problem is, supposedly the wealth of the Confederacy was in Richmond. So as to not let it fall into enemy hands by order of the President Jefferson Davis it was moved to an undisclosed location. Fast forward 150 years that location is still undisclosed! Thus the “Lost Confederate Treasure”

That is where our story begins.

Des Cook and Madison Callum are two well educated volunteers researching civil war papers and letters for a Savannah Museum. When they discover a hidden cryptic letter they decide to go on an adventure to see where it leads them. The back story the Author gives you on Des and Madison helps you to understand why they would do something like this.The relationship between the two characters seems very real. Elliot Mason did a great job bringing these two to life.Personally I’d like to know where they go from here.

What starts off as what seems like a fun and  exciting way to spend a few days turns out to be something very different. A much more dangerous and deadly game than they could ever have imagined. As they soon find out they are not the only ones following these clues.

The Arlington Orders is a fast pace adventurous and deadly thrill ride that starts off fast and does not stop until the surprising explosive ending. You do not need to be a  civil war buff to get into this book.Just a lover of good mystery/suspenseful thrillers

In the dying days of the Civil War, an assassination attempt is made on Confederate president Jefferson Davis. Faced with this ongoing threat, the decision is made to evacuate the Southern capital of Richmond, Virginia. Everything must be moved, including the Confederacy’s substantial gold and silver reserves, which must be kept out of Union hands.

Thus, a covert plan is devised to transfer it to a secret location. However, during the move, the treasure vanishes without a trace. One hundred and fifty years later, two historians, Des Cook and Madison Callum, stumble upon clues that could solve one of the war’s greatest mysteries. While leading them to the richest and most significant find in American history. But others are searching for it too and will do anything to obtain it. Now, Des and Madison find themselves entangled in a race that, if they fail to win, would not only result in their deaths but also change the very future of the country.

Elliot Mason, a California resident who earned his bachelor’s degree in history from the University of Southern California. His master’s from Azusa Pacific University. He  has completed his new book “The Arlington Orders”: a masterful and evocative work that brings the human face of the Civil War and its lasting impact on the soul of a nation to life.

Join Our Quest! Find your story! The Uncommon Quest

Timothy Mean and the Time Machine