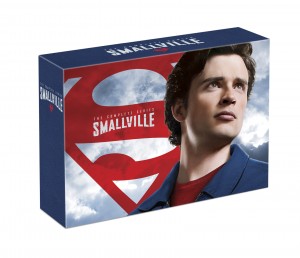 The relationship between Lana Lang and Clark Kent is easily the most intriguing and special of the Smallville series.  The early years of the series in which Clark shyly admired Lana from a distance before getting closer to her is what drew fans into the young and hip story of the early years of Superman. In one particular episode, “Exile” (Season 3, Episode 1), Lana tries to bring Clark back to Smallville after he is affected by the red kryptonite ring.   This would show her true feelings toward the long evolving romantic relationship between Lana and Clark.  Sadly, their romance could not last as it would not maintain the genuine story of Superman.  Who is your favorite female character that Clark had a romance with from the series?  I think I have the most affection for Lana because she was the first one in the series and it was sweet and innocent.

With the ‘Smallville: The Complete Series’ DVD, fans will be able to relive all of Clark Kent’s romantic encounters, from start to finish! With an Exclusive Daily Planet newspaper written by DC Comics that highlights the important storylines developed during the 10-year run of the show, the Smallville Complete Series is a must-have for all Smallville fans! http://amzn.to/mMDIYq

“I have been hired by Warner Bros WBWord division to raise awareness for ‘Smallville.'”