Sharing My Story of Abuse Vicky Bedi – Author of “Whisper of Hope, Cry of Despair” 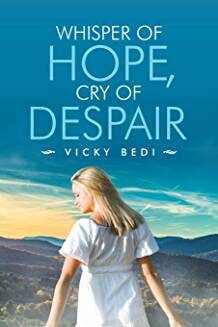 Author of “Whisper of Hope, Cry of Despair”

Sitting down to write a story about the effects of abuse in the home is a daunting process. When I began the process writing my memoir, “Whisper of Hope, Cry of Despair”, I knew I had a strong message to convey to readers and I thought I would begin by sharing the story of my mother. My mom, Laura Hayna Bedi, had endured child abuse, neglect, poverty, overwork, and discrimination. As I began writing my mom’s story it became apparent that the story really was about me and how the tragedies my family faced affected me and my upbringing. These tragedies include a murder, two suicides, and multiple episodes of child and spouse abuse.

My mother treated my father and myself viciously. She berated us emotionally. After all, we were “liars, thieves, and no good.” Physically she attacked my father at least twice with a knife. She often threw things including pots and pans

“Whisper of Hope” also details the hardships immigrants endured during the first decade Whisper of Hope the twentieth century in the United States. I come from a family of immigrants who came to the New World during the early 1900’s. In my book, I make sure to identify how my family’s past and the adversities they faced affected the decisions they would later make.

My story applies to anyone who was neglected or abused themselves while growing up or who witnessed the abuse and neglect of others. This also applies to people who were raised in a home where drug or alcohol abuse occurred. These survivors and witnesses will identify with my self-preservation techniques of becoming nearly invisible by being quiet and hiding, by always having escape routes planned to be able to run away from danger, by creating hiding places in the house, and by avoiding speaking to and interacting with my parents. Others will also identify with my not having friends over since my home was a war zone with my parents screaming and objects flying. In fact, the only time I felt comfortable in my house was when my parents weren’t there. I believe that children raised in a home with substance abuse were truant from school because they needed to be home away from the abuse just like I did.

I hope that reading my story helps others such as teachers, law enforcement officials, clergy, medical and mental health personnel, and peers to recognize, understand, and develop empathy for survivors of abuse. Perhaps if I had some guidance or at least empathy as I was growing up, I would be healthier now and less haunted by my past.

This book is more than a written history of my family’s struggles but tells of my journey and how I moved on from my past to create a life free of neglect and abuse. It is my sincere hope that this book will help others in their journey as survivors of abuse and that other survivors of abusive family situations can better identify dysfunctional relationships and develop the courage to move forward in their lives.

In the making for more than fifty years, Whisper of Hope, Cry of Despair, by author Vicky Bedi, chronicles how, throughout her lifetime, she has been molded by the life experiences of both her mother and father. This story is important because it tells about Slavic immigrants coming to the New World during the first decade of the twentieth century, offering details about how they lived and the adversities they faced. It discusses the murder of Bedi’s paternal grandfather in 1917 and the resulting shame, guilt, and loss of family for her father and his brother. It shares the suicide of her maternal grandfather, who couldn’t bear the loss of the Czar’s Russia and who couldn’t face the shame and guilt of familial incest. Finally, it tells of the intergenerational effects of child abuse, such as further child abuse and spouse abuse. In Whisper of Hope, Cry of Despair, Bedi narrates her story to help other victims of family situations accept parents and family without judgment and to record the empathy and peace she’s found

A Change of Faith by Roger Kazanowski