Being Santa : It’s The Best Job in the World 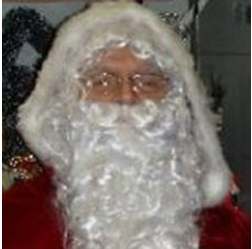 Ok so Halloween is over ,The leaves here in Western New York are Falling and Thanksgiving is just around the corner. So besides stuffing our selves with Turkey (at least us in the U.S.) there is one more thing that happens this time of year. That’s right Santa arrives at the Mall. Of course we all know the real Santa is very busy this time of year so it’s really his helpers we see. Here is the story of one such “SANTA” who also coincidentally also happens to be the author of the new book series           The Adventures of Fawn.

I first stepped into Santa’s boots for the Christmas season in 1976. A photographer friend of mine had asked me to step in for him when the fellow he’d hired was a ‘no-show’. It seemed pretty easy! I knew if a child is 6 years of age…he’s generally in 1st grade…if he’s 7…2nd grade, etc. So I’d usually

start off asking their age and then say something like: “That’s right…you’re eight now…you’re in the third grade…aren’t you?” The children would be all wide-eyed…like Santa really knew about them personally. Other times, I’d reverse it and ask what grade they were in…and follow up with their age. Then I’d ask, “Have you been good for your mum and dad?” It was often amusing to see the looks on their faces when that question came up.

But I got a quick lesson my very first day on how Santa can make or break a child’s Christmas. I’d just impressed a young lad with my ‘age/grade at school’ expertise…and segued to ask if he was being a good boy for his mum and dad. He was only 8…and he looked up at me and replied, “My dad died in March.” I was stunned. You could have bought me for 2 cents! I saw tiny tears start to well up in the corners of his eyes, and knew I had to think quickly! It was at that moment I realized how important Mrs. Claus can be.

He was sitting on my knee (of course) and I hugged him as I said, “Michael! Mrs. Claus was sitting with me by the fire last night having a cup of hot cocoa, and she said, ‘You’ll be in Cambridge tomorrow. You might be seeing Michael, and his father passed away…remember? I’m worried about him. I want him to have a good Christmas.” I almost had tears in my eyes as he looked at me with total amazement. I explained we were both concerned about him and how Santa and Mrs. Claus loved him and wanted him to be happy. I must have spent 15 minutes with him…and maybe folks waiting in line might have been a tad annoyed. But by the time Michael said ‘Good-bye’ he was laughing and smiling. That was what was most important to me.

Santa is powerful! He can instill in children the wonder of the Christmas spirit, and inspire them to be good, too. He can bring out the innocence and wonder of Christmas.

I recall children who would see me sitting on my chair on a stage in the middle of the mall, and they’d come running at a full gallop, jumping high…sailing through the air into my arms. It was always the same, “I love you, Santa!” I remember one little girl who came up to me and excitedly told me, “I can dance!” I smiled back at her, saying, “By all means, dear….show me!” She danced across the stage and then came and sat on my knee and hugged me tightly. Other times children would give me Christmas cookies, or drawings they’d done especially for me, or Mrs. Claus.

Every man I ever met who donned the big red suit and boots all agreed it’s the best job in the world. Many of the men I spoke with thought as I did…’I’d do it for nothing!’…it was just such a wonderful opportunity!

One never speaks in the 1st person as Santa. It’s always, “Santa hopes you’re being good.” or, “Santa loves you, too!”

And he never makes promises. He strikes a deal.

“If you’re being good…doing your homework…picking up your toys without mum and dad asking…no fighting with your brother/sister…brushing your teeth…going to bed without making a fuss…if you’re doing your best for Santa….then you know for sure Santa is going to be doing his best to get you the things you want. OK?”

I’d usually sit on my ‘Santa chair’ for six hours at a stretch…and on busy days you couldn’t see the end of the line…there were so many children waiting to speak with Santa. I remember one busy Saturday…when I was getting a tad warm and tired. I was probably talking to my 300th child that afternoon, with another 300 waiting in line. As I took a moment to scan the huge line of people waiting, I found myself wondering, “How does the real guy do it?!” Of course…it only took a second or two to realize what I’d just wondered to myself. But over the years…I’ve talked with others who heartily laughed and told me they too had found themselves doing the same thing once or twice.

Going into the Red Cross around the Christmas season to make a blood donation as Santa Claus is always a kick. The staff are always so jovial, as are the others giving blood. Afterwards, I often stand outside glad-handing, and trying to persuade passersby to come in and make a donation, too. You’d be surprised at how persuasive a chap Santa can be!

There are folks who will argue that Santa Claus takes away from…or doesn’t represent…the ‘true’ meaning of Christmas…and I grant you that in a sense…that may be accurate. But…Santa represents the good in the human condition. He has the ability to bring out the best we can be. He embodies the spirit of love and goodwill which permeates the Christmas season, and brings laughter, joy and smiles to children and their parents.

I’ve had the privilege of wearing Santa’s coat and boots for 40 years now, and one universal truth shines through. We love our children, and want the best for them! THAT transcends race, religion, nationality, ethnicity, and any of those human constructs which make us ‘unalike’. Many times I’ve locked eyes with parents whose faces are beaming with happiness as their child finishes a visit with Santa. They smile as their son or daughter give Santa one last ‘Good-bye’ hug or kiss, and we share a golden moment in their child’s young life. You can’t put a price tag on that…and you cannot deny that demonstrates love for (hu)mankind…which is the fundamental basis for the celebration of Christmas.

Santa! He’s got the best job in the whole wide world!

Through almost 40 years as a Santa Claus, Al E. Boy developed quite a repertoire of tales to explain and answer the many questions children ask about Santa, the North Pole, his reindeer, and his friends, the elves.

It was this collection of tales which prompted him to begin writing The Adventures of Fawn. Through the young daughter of legendary reindeer Comet and Vixen, he’s been able to weave an exciting, colorful, imaginative world which will delight readers of all ages!

Mr. Boy not only hopes you enjoy these tales, but make reading them part of your Christmas traditions, as well.

Visit Amazon to check out this Future Christmas Classic

Give Your Child a Love of reading

Book Review: Facing Forward: An Artist, A Community, And Stories Of Resilience