by Ajax Minor author of

The Ur Legend fantasy series: Sun Valley, Moon Mountains and The Girl From Ipanema: The World Turned Upside Down

Is there some characteristic particular or peculiar to writing fantasy? Fantasy requires the same writing skills and discipline as any other genre. To be fair, perhaps less research than is required in a work of historical fiction or a technically demanding narrative such as those that were written by Tom Clancy. And as for peculiar, well, fantasy by definition is peculiar, so I guess the question is its own answer.

But why would anyone write fantasy? I believe the genre chooses the writer. It’s like asking why someone prefers chocolate to vanilla ice cream. Something pushes your button. For a writer it’s an especially important decision. Writers, novelists in particular, tend to choose a genre and stick with it. Picasso had a Blue period and a Rose period and a Cubist period. Maybe those in the visual arts are antsier. Novelists tend to cling to a genre. Just consider Tom Clancy, mentioned above, or John le Carre or James Michener. Or Ursula Le Guin. I could go on. Perhaps the craft of writing a novel is so demanding in terms of time and concentration and structure that changing the basic stock of such a complex stew each and every time is just too hard.

Then why do I write fantasy? From the first time I picked up a copy of Homer’s Iliad I was hooked on imagining myself in another time and place. Imagine is the key word and my imagination was always at a boil. And with fantasy the hook is the ability to drop yourself into a completely different world, with a very different culture and very different customs and creatures. Why, do you suppose, works of high fantasy are so damned long? Those who love the genre want to remain in an alternative reality as long as the author will permit. I think this explains the huge success of J.K. Rowling’s Harry Potter series.

So if you like to dream and imagine and want to write, it may be the genre for you. And I should add that the real key to writing is waking up one day and finding you have something you want to say, otherwise you will stare at a blank page or Word doc and it will just keep staring right back. It’s always your move. So in my case, while I felt comfortable writing academic prose in college, I never thought I had any talent for putting a story down ‘on paper’ and finishing it. Until I had something to say. My wife and I lost our daughter to the effects of a birth accident when she was an infant. I wanted to say something about that. And about my daughter.

What better genre to explore as a writer with that story to tell than fantasy. You create a world of make believe and make it believable. And in my case, I was able to create a life for Katherine that she never had a chance to live. I could have written a work of dramatic fiction, but what would I have said? Someone else would know how, but they would have chosen a different palette because it suited their mind and the way their mind worked.

While I think it is important to create an alternative reality that has some logic behind the magic and not simply the abracadabra variety, the world you create can be as bizarre as you like. But write what comes naturally. I’ve never had writer’s block and one reason is that I sit down with my notebook, knowing what my starting and ending points are for that day, and then let the story flow. I worry about style and perfect structure and grammar when I edit. 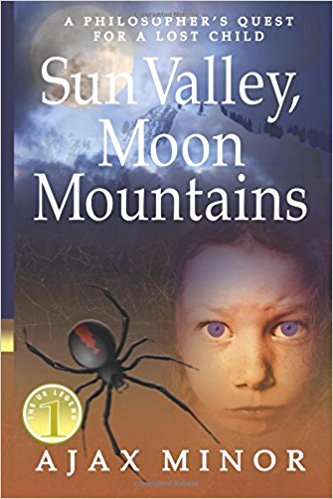 When you have a reason for writing something as ambitious as a novel, or even a shorter work of fiction, you’ll know what context suits you. If it’s wrong, you and the ‘page’ will spend endless hours staring at one another. But if it’s right for you, your mind will spill out its contents down through your arm, into your pen or onto the plastic keys of your desk or laptop and onto ‘the page’.

Ajax Minor was born in Danbury, Connecticut, on September 11, 1950. He ‘prepped’ at Danbury High School and received an A.B. from Princeton in 1972. After graduation he moved to New York City and began a career as a bond trader. He and his wife lived in Manhattan and Brooklyn for twenty years, and spent another twenty in Denver, Colorado, where their daughter Katherine was born, and died. Presently they reside in Monterey, California.Minor began writing after the death of Katherine. He is the author of the Ur Legend Series. More information is available at ajaxminor.com <http://ajaxminor.com/>.

The Transition Starts Here, Now and Together By Rob Hopkins

How To Get Books Without Spending A Penny