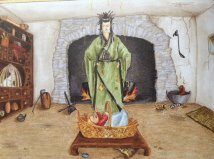 Ru-lan – The Prince is Born by Larry Bennett

With a six year old Grand Daughter I seem to watch  a lot if not all the Disney Animated Fairy Tales. Or maybe I should say Fairy 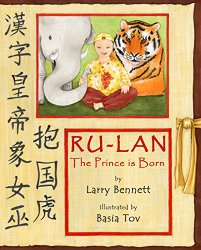 Tales Adapted by the Disney folks for their films.  As I was reading Ru-Lan I was thinking this book is like a combination of Tangled and the Jungle Book. Not that the stories are similar but the fact 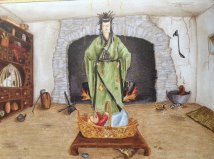 that as in Tangled the Royal Baby is stolen, baby Prince Ru-Lan is taken by an evil Enchantress by the name of Su-Ling. As far as the Jungle Book it’s just that this Magical Chinese Fairy Tale is loaded with kind helpful (talking) animals that want to help our little prince.

Ru-Lan The Prince is Born is the first in the Ru-Lan Adventures series, Written with what I feel is the Classic Fairy Tale Genre in mind,but with a twist! It has a Chinese Theme. This is a fun story with some adorable Jungle animals.You know your wise Talking Elephant and the even wiser Tiger that piggy backs *Spoiler Alert*the young Prince to safety. Of course we can’t forget the chubby litte Panda Bear that might be possessed with a 1980’s version of Steve Martin EXCUUUUUSE MEEEEE!,

The book has the added value of showing kids how things can work out when you have kind helpful friends to guide and help you. There is also the enchanting Magic that is a must in all Fairy Tale. No fairy Godmother here though but we do get to see a giant magical Bird come and answer the Prayers of the Empress. 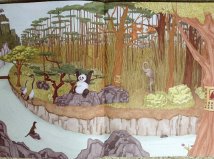 The Artwork by Basia Tov is absolutely fantastic and adds so much to the book. She captures the personality of the jungle animals and people in the story. The Chinese landscape and buildings are also impressive. Also quite helpful is something you don’t normally find in a children’s book are the footnotes. These footnotes explain some of the Chinese terms and words used in the book.

Larry Bennett  is a graduate of the Wharton School of Business at U Penn,also a serial entrepreneur and a book publishing industry executive.  In 2004  he and his wife, Dorothy adopted a baby from China, Olivia Cai Hua. With the help of her Chinese babysitter, they raised her bilingually, maintaining ties with the culture of her birth country.The Adventures of Ru-lan series was born from the stories they would create for their child.

Basia Tov has been making art, one way or another, throughout her life. During her childhood in Poland, she attended an artists’ atelier where she received guidance as a painter. At the same time, she has begun experimenting with photography as an artistic medium. After arriving in New York, her interests led her to Fashion Institute of Technology where she received Fine Arts degree in Fashion Design. Although her affair with the fashion world was short lived, her work in arts has never seized. Basia has continued to paint and explore photography. She has begun to exhibit in New York City and beyond. Following the birth of her two children, she became fascinated by child development and education as well as children’s literature. The satisfaction she gained from volunteering in schools brought her to the front steps of the prominent hub of progressive pedagogy, Bank Street College of Education. Here, she attained master’s degree in Early Childhood General and Special Education.

The Adventures of Lovable Lobo- Lobo goes to the GALAPAGOS; by C.L. Murphy

The Adventures of Fawn a Christmas Classic : an Interview with Al E. Boy

Who Pooped in Central Park? Scat and Tracks for Kids