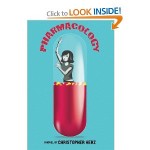 “Spent time in my room playing records, cutting out little sentences from each of the books and pasting them on whatever paper I could find until I had a story formed. My mind arranged images and

words as it saw fit. Figured that if what I wanted to read didn’t exist, might as well do it myself. When I had my story, I’d create a little book out of regular paper that I could carry around in my back pocket. Didn’t do any copying back then, so each book I created was unique. Had no idea what I was doing was called a zine — just felt good creating my own reality, and have it exist as something I could touch,” Sarah tells us about how she first started making her own alternative magazines.

Sarah leaves Missouri to go to San Francisco to work and send back money because her “Pops” has cancer. “Back then, you’d go shopping for rooms to move into and live in a place with a bunch of folks who had been there before you and pay them around three hundred dollars a month.” Sarah shared her apartment with about seven other people (including two vampires). Many were heroin junkies. Sarah worked at a cafe where they played “Leonard Cohen, the Animals, the Clash, Velvet Underground” and she received mix tapes of “the Gravediggaz” in exchange “for cookies and coffees.”

Drugs, strange characters, ambitious artists and sex dens populate the city, where Sarah always trie to makes extra money for her Pops’s experimental treatments and medicines. Using Kinkos, she publishes her magazine, Luddite. “Late at night the city slowed down, the tourists ducked into their hotels, and true life started.” Sarah and her friends visit the Musee Mecanique, “an old-style arcade with machines from the twenties and thirties that used to take a nickel or a penny and allow for escape from your world.” There was “City Lights Bookstore, the place where everything started in the world that I wanted to get into but could never” and “the alley they renamed Jack Kerouac Alley” and “Steps of Rome, a cafe spot run by Italians who just kept bringing their relatives over to work behind the counter.”

Sarah needs money and interviews as a telephone salesperson in the Marina District “where the normal people lived” and ends up selling the services of a chimney sweep dressed up as a hobo, but he doesn’t always pay and she has to move on. Sarah meets Alberto Orca and hopes to collaborate on some writing endeavors with him, and he loves her, and Josephine and Kerri move in at her apartment house. Sarah likes Josephine(whose ex killed himself because of her) and visits a special place with her, the church where Joe DiMaggio and Marilyn Monroe got married.

When you’re reading Pharmacology you definitely don’t know what will happen next, just like a person moving through an unusual life. Will Sarah be able to make money to send back to her Pops, and will she be able to enlarge her “zine” Luddite with stories of abuse by spying on the drug companies? At one point she “had two choices of what to join: the corporate world that would soon replace sitting in front of stacks of papers with sitting in front of a computer,
or the underground life of sex dungeons. You may believe there’s not that much of a choice, but think on it and tell me that your soul is any cleaner with the choice that you made to survive.”

Sarah does choose a company that is creating diseases in order to sell the pharmaceuticals that can cure them, and what she sees and learns there is the major point of Christopher Herz’s book. How we are manipulated by companies with no scruples whatsoever who are intent on making money is a major source of shock and surprise. Although this is a work of fiction set in the early 1990s, it certainly strongly resounds with a great ring of truth! An important book by an increasingly-important author.

Pharmacology, by Christopher Herz, published by AmazonEncore on December 6, 2011, 224 pages.

Christina Zawadiwsky is Ukrainian-American, born in New York City, has a degree in Fine Arts, and is a poet, artist, journalist and TV producer. She has received a National Endowment for the Arts Award, two Wisconsin Arts Boards Awards, a Co-Ordinating Council of Literary Magazines Writers Award, and an Art Futures Award, among other honors. She was the originator and producer of Where The Waters Meet, a local TV series created to facilitate the voices of artists of all genres in the media, for which she won two national and twenty local awards, including a Commitment to Community Television Award. She is also a contributing editor to the annual Pushcart Prize Anthology, the recipient of an Outstanding Achievement Award from the Wisconsin Library Association, and has published four books of poetry. She
currently reviews movies for , music for , and books for .

Join Our Quest! Find your story! The Uncommon Quest