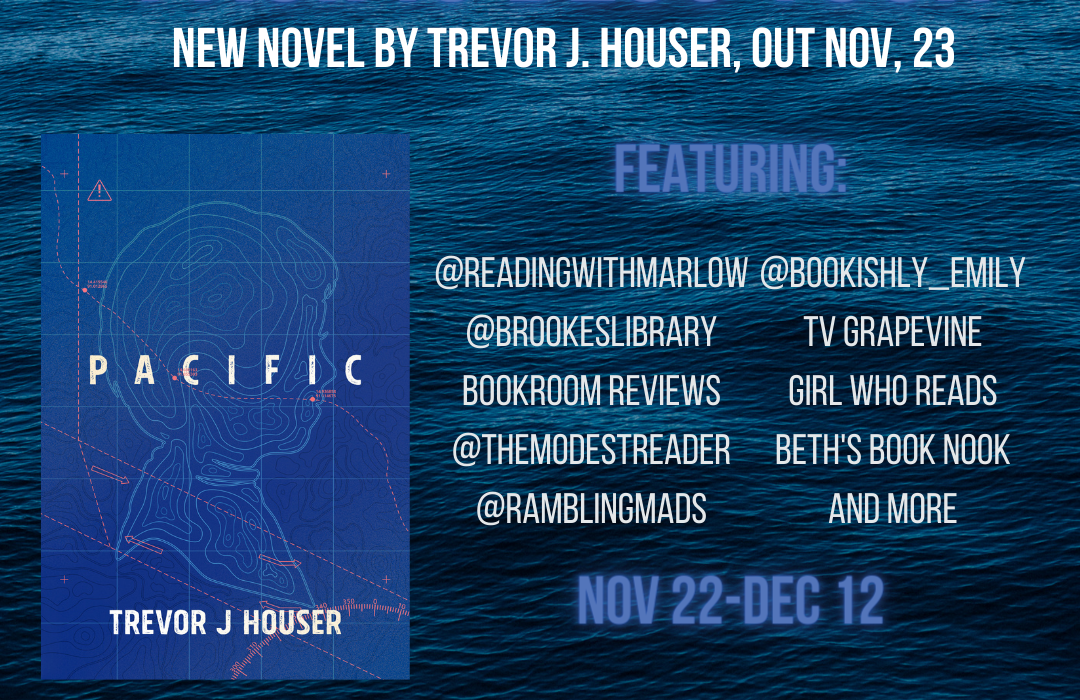 What is a desperate father willing to do to save his son…and what if it means braving deadly storms at home and on the run?

On a remote Puget Sound Island, police chief Bell navigates his job and marriage in the wake of his

son’s near-death brain surgery. When his wife no longer wants to tempt the fates of experimental medicine, he takes matters into his own hands. With the help of his spaced-out fisherman friend, Bell kidnaps his boy and sets sail for Guatemala in search of the mysterious Dr. Haas. On the way, they’ll brave the seventh biggest storm, befriend two behemoth fly-fishing Nords, and try to outrun the ex-Navy captain hired by his wife to find them.

With mesmerizing descriptions of the Pacific Northwest, Central America, and the miles in between, Houser captures the heartbreak and hope of a desperate parent, while still maintaining a sense of dark humor and playful language that turns the mundane into something mythic. “If you are a father, or know one, Trevor Houser’s Pacific, is a wild, quixotic ride that will challenge your understanding of what it is to be a parent, “ says Larry Colton, author of Southern League and Counting Coup. For fans of Denis Johnson, Richard Brautigan and Jenny Offill, Pacific reminds us that there’s magic, beauty and hope in the world, if we’re just willing to go and look for it.

Question 1. This is your debut novel. How did writing a full-length piece differ from the short stories and other pieces you have published?

Trevor J. Houser: Although this is my first published novel most novelists have a closetful of novels they’ve already written that didn’t make it for one reason or another. For me the biggest difference in writing a novel is maintaining the energy of that initial idea. To maintain the consistency of that voice, of that style over the course of many months.

2. Family and fatherhood is a major theme throughout Pacific. Did your own family life inspire your writing for this book?

TJH: I have a son who was diagnosed with a rare brain disease. After years of navigating all the unknowns and not really writing there was suddenly some light at the end of the tunnel with his prognosis and soon after I found myself writing this book. Pacific is somewhat based on the experiences we’ve been through with our son, but a lot of it is the made-up fantasy of a parent who wishes they could do something more just than talk to a million doctors and not sleep at night. Even though the way in which Chief Bell shows his love for his son might be considered unconventional, it demonstrates how fathers are just as capable as mothers in the depths of their feelings and devotion.

3. How did the Pacific Northwest influence your story?

TJH: I grew up in Oregon, but after leaving for college I lived for years in places like New York, San Francisco and Argentina. When I returned to the Pacific Northwest with my family a few years ago I think I forgot just how exotic and rich this place is. It took being away for so long to appreciate the strange beauty of it, which is what I hoped this book would be: strange and beautiful.

4.Fans of which authors/books do you think would enjoy Pacific and why?

TJH: Hopefully fans of authors such as Kate Jennings and Jenny Offill will like it because of their sentence level precision in telling stories of hope and heartbreak. Donald Barthelme and Richard Brautigan for their playfulness with language and form, and their sense of humor. Denis Johnson for his melancholy strangeness. All my favorite writers tend to elevate the everyday through their language to make the mundane transcendent. To make regular life almost mythic. It’s something I try to accomplish on a sentence level and keep building it so that courses through the entire narrative

5. What’s next for you and Pacific?

TJH: My second novel is coming out in 2023. It’s about a math hobbyist, who believes he’s discovered a theorem that might predict when and where the next mass shooting takes place.

The following is an excerpt from Chapter 1 of Pacific by Trevor J. Houser.

I HAVE A family. In the gray island-mists north of Seattle I have them. We bought a house in a place called Wolf Island with big Asian maples overlooking Padilla Bay. That first spring I drank wine on the porch and felt so proud. Sunlight through the mist and mossy trees. Feeling like life made sense. Do you know that feeling?

Except now we have a child who might die.

No one is sure. So many children die. But this is our child, so it’s different.

He has a rare brain disease. Like so rare if you say it in most hospitals they look at you with eyes that are kind but vacant, like a trout’s eyes as you lower it back into a cold spring stream.

Now we go to the doctor and laugh.

He looks at nurses and makes jokes and runs up and down the halls and they laugh. Bells. Stars. Planets go by. He is underneath all of that and he shows God what it means. God probably looks down. God looks down, I’m sure. God watches him and his rare diseased brain that is so rare and diseased his pediatrician had never heard of it.

One afternoon, I cried over the sink while eating an avocado.

It was an old avocado that I ate still in its cling wrap as more clouds formed above our small, lumpy yard. I was eating the avocado and looking out at our yard, the mysterious lumps, the sky, the trees. I just sort of smooshed half the avocado into my mouth, thinking of my son. His brain has blood vessels that are too large. His small heart. His small heart is so small.

I could become important. I could drive a speedboat over an iceberg with the Dave Matthews Band playing on the prow and nothing would change. I could become a Navy Seal, the best ever, and his brain would still have too much blood inside it. Those vessels would become enlarged. His eyes would widen as we watch some muted game show on the TV that’s bolted to the wall surrounded by other children facing the possibility of death. His brain would expand. Or it already has.

On Sundays, we play Captain America.

He has the pajamas with the stars and stripes. He runs so fast and jumps nearly over the bed. He runs and jumps on the bed and makes this noise that isn’t a scream but has the same energy of a scream.

He jumps and laughs.

Trevor J. Houser is an advertising copywriter living with his family in Seattle, WA. He studied creative writing under Thomas Beller at Columbia University. His stories have been published in dozens of literary journals, including Zyzzyva, Story Quarterly, and The Dr. TJ Eckleburg Review. He’s been nominated three times for the Pushcart Prize. He also received special mention in Best American Fantasy Vol. 2. You can find the author on Facebook, Instagram, LinkedIn, and at www.houserfiction.com. Pacific is his debut novel.