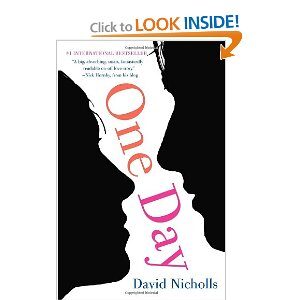 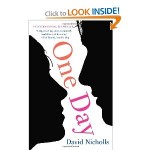 Although it doesn’t appear so at first, One Day is a vastly complicated book. On the surface just a story about “friends” who don’t stay together as a couple after meeting when graduating from the university, One Day is really two portraits – one male, one female – of two people who represent a generation wrapped around at-the-time notions of class and money. Exotic to Americans (where traditionally two people in this situation would never have remained friends), One Day imagines what bright Emma (with honors in literature and history) and well-bred and handsome Dexter (whose parents can immediately afford to send him on a trip to many countries around the world to broaden his mind) will become by the time they’re in their forties (since the novel begins when they’re in their early twenties in 1988). In step after painful step of each of their up-and-down individual lives, Emma and Dexter are faced with unforeseen twists and turns but always look to each other for comfort and support even though they are afraid to admit their undying love.

Not as intelligent as Emma (who’s always giving him books – including the literature of the times – to read), Dexter goes from wanting to be a photographer to settling on becoming a TV presenter, and, aided by his good looks, drinking and drugging himself along the way with a multitude of sex partners. Emma works at the humiliating Loco Caliente (Crazy Hot) Bar And Restaurant, becomes its manager, and finally leaves to get a teaching certificate so that she can buy herself the nicieties she could never afford before (while still retaining her feminist, health and labor values). She teaches lower-class children at schools where she puts on plays like Oliver and tries to write short stories, mysteries and novels in her spare time, but realizing that they’re not good she never completes these projects. Eventually Emma settles for living with boyfriend Ian, a comedian whom she really doesn’t love.

Neither Dexter or Emma are even remotely happy. And then, because neither of their lives have turned out well, they first turn on each other and afterwards disconnect from each other. David Nicolls is a master storyteller as he explains to us what happens to Emma and Dexter separately over the years (including a chilling game of “Are you there, Moriarity?” that Dexter endures). They finally meet again at the wedding of Emma’s former roommate when they’re in their early thirties. Once more they decide to support each other through life’s heavier travails, Dexter in an unhappy marriage and at a job he dislikes although he adores his young daughter, and Emma surrounded by married friends who are weighed down with the difficulties of raising their own children. Emma succeeds in publishing a book about a teenager and becomes better-dressed again and uplifted, but both Emma and Dexter have obviously been banged around by life quite a bit by this time. About-to-be-divorced Dexter meets Emma in Paris, when “what I thought we’d do for the next couple of days is, you can show me the sights, and I’ll just mope about and make stupid remarks,” he says.

David Nicolls’s complete and lively characterizations of Emma and Dexter and their lives rings true and is convincing, especially in their dialogues. Not just male, not just female, not just rich, not just poor, Emma and Dexter are flawed and human, often not making the right decisions for themselves. They don’t become who they’d thought they’d become (as who does?) and we are left with great affection for them, making do with who they are. As Emma says, “you start out wanting to change the world through language, and end up thinking it’s enough to tell a few good jokes.” A compelling and thoroughly interesting read!

One Day by David Nicholls, on sale in paperback on June 15, 2010, published by Vintage Contemporaries, 448 pages.

Christina Zawadiwsky is Ukrainian-American, born in New York City, has a degree in Fine Arts, and is a poet, artist, journalist and TV producer. She has received a National Endowment for the Arts Award, two Wisconsin Arts Boards Awards, a Co-Ordinating Council of Literary Magazines Writers Award, and an Art Futures Award, among other honors. She

was the originator and producer of Where The Waters Meet, a local TV series created to facilitate the voices of artists of all genres in the media, for which she won two national and twenty local awards, including a Commitment to Community Television Award. She is also a contributing editor to the annual Pushcart Prize Anthology, the recipient of an Outstanding Achievement Award from the Wisconsin Library Association, and has published four books of poetry. She currently reviews movies for , music for , and books for .

Something Stinks! by Gail Hedrick — A Book Review