The Monster That Ate my Socks by A.J.Cosmo Children’s book review 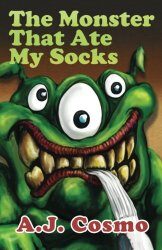 I’ve often wondered,like the rest of the civilized world where do socks go to hide. You take them off throw them in the wash and somewhere between the time you take off your dirty socks and put them back clean in your sock drawer some will most definitely be missing. Fear not folks,we have an the answer.The answer comes in the form a little green three eyed monster.

Author A.J. Cosmo has discovered a silly looking Three Eyed Monster with bad teeth.Most likely dirty,stinky,socks dont do much for your dental hygiene. Why is it Moms never believe a kid when he tells her “A MONSTER ATE MY SOCKS ! “

This is a fun little story of a little boy named Ryan trying to solve the mysterious sock disappearance that we have all wondered about at one time or another.  An easy read and only about 30 pages its a nice little paperback for Second or Third grade readers. It even has a little lesson plan at the back of the book. Who were the characters?Why would the Author write this story? Stuff like that I thought was a pretty cool idea.

Find it at Amazon

So let’s find out a little about Author A.J Cosmo

1. What do you do when you’re not writing?

I tend to work in batches and bursts. When I write, that’s pretty much all I do until it’s done. Then I switch hats and I illustrate until my hand falls off. Then the hat switches again to do marketing, publishing, and anything else that might need done for the books. Outside of children’s literature, I workout five times a week (and encourage children to do the same!) and play video games (Wii U, PS3, and 3DS 😛 ) I also have a Kindle and read through at least two books a week. Lately, I’ve been trying to get through all of the kidlit classics that I didn’t read as a child.

2. Have you always wanted to be a Children’s author?

No. I’ve always wanted to be a creative. I have two main talents: writing and illustrating. Artists tend to get segmented quickly by the drive to make money, so we specialize. I’ve tried to resist that. I stumbled upon writing for children because I could practice all of my skills at once. I love to tell stories, create worlds, and entertain, so the only adjustment I needed was to change the intended audience. It also helps that I’m a kid at heart.

3. Missing socks have befuddled people for years. How did you finally figure it all out?

Ha! The best stories and ideas come from things that are either relatable or understandable. We want to see ourselves in what we enjoy (why else would we be interested?) I think this book has been well received because the title evokes something familiar while the story itself reflects common challenges.

4. Who is /was your favorite kids author?

Tough question. Right now Madeline L’Engle holds my adoration. However, Roald Dahl would probably win out over the long run. Also, Shel Silverstein would be close behind (hey we have matching beards!)

5. Who is your favorite fictional literary character from any Genre?

Marvin the paranoid android from Douglas Adam’s Hitchhiker’s Guide to the Galaxy. I think that character embodies the “why did I bother getting out of bed today” voice that’s in everyone’s head. Despite Marvin’s pessimism, he still comes through in a pinch.

This is a tough question! I have some of the humor and neurotic tendencies of Woody Allen (funny how he is both a real person and a character!) while I oftentimes feel burdened by things that don’t seem to bother other people, like Jonas from “The Giver.” I believe in big things and want to create whole worlds like John Hammond (Jurassic Park) knowing that most likely it will all fall apart

outside of the dream. I can be as innocent and fatalistic as Billy Pilgrim from Slaughterhouse Five (and probably comfortable in a zoo) and as stubborn and loving as Meg Murry (A Wrinkle in Time.) I’ve never read a character that I couldn’t see at least a little bit of me in them (yes, even the villains) and I’ve never written a word for a character that wasn’t a part of me. I guess that’s why we read: so we can see ourselves.

7. Classic Question here. Three people living or dead you would like to meet? What would you ask them?

Ed Wood: Why in the world did you keep going?

In all seriousness I froze at this question. There are an innumerable number of answers. All of the famous tyrants I would ask why they did what they did. All of the famous religious leaders I would ask about their religion (and reflect upon what they have turned into today.) All of the inventors I would tell what the world had become. While I would discuss with all the famous philosophers how the world is. In the end though, given a time machine, I would probably just stare blankly at the dial wondering where I should go.

8. What would the title of your Autobiography be?

Old Soul. It’s a term that many people have labeled me as if they believe in reincarnation but only for others. What they really mean is that I’ve had life experience and it shows. I went through a lot of emotional upheaval at a young age, so that’s always affected me, but it’s given me just enough of a unique viewpoint to seem odd. I hope I never need to write an autobiography, the body of work should say enough.

9. Ten years from now if you look back how many books will you have written?

I’d like to say that those stories that needed to be told were realized in one form or another. A number is hard to guess, because I’ve been slowing down recently, but currently I have self-published forty-two children’s books, so perhaps a hundred, perhaps fifty. Numbers don’t matter as much as making an impact on someone’s life. That’s the true goal in all of this.

10. And finally, what is your favorite book and why?

Fiction: The Hitchhiker’s Guide to the Galaxy by Douglas Adams. The series as a whole taught me tons about comedy, plot, character, and just plain old entertainment.

Non-Fiction: The War of Art by Steven Pressfield: No other secular book has rattled my life or comforted me more than this little gem. It’s an anthem for creatives and some brutal truth for artists living today.

Thank you, Dick Leonardo, for the opportunity to speak to you and your readers. It was a pleasure! If anyone has any questions, or just want to say hello, please feel free to contact me on Twitter @ajcosmokids or through good old email at aj@ajcosmo.com

The Richest Season by Maryann McFadden