Meg: A Novel of Deep Terror 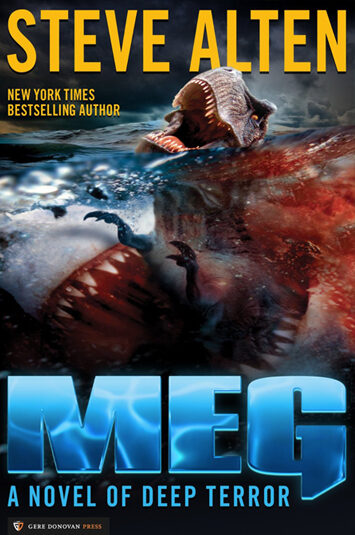 The MEG, written by international best-selling author Steve Alten tells the story of navy deep-sea pilot Jonas Taylor, who seven years earlier found himself on a top-secret dive in the Mariana Trench seven miles down in the western Pacific Ocean. Life exists in this 1,500 mile long gorge thanks to hydrothermal vents which create a warm layer along the bottom. Taylor comes face-to-face with Meg. the species occupying the top of this abyssal food-chain — Carcharodon Megalodon — the 70-foot, 70,000-pound prehistoric cousin of the great white shark.

Taylor narrowly escapes the Meg, but his actions cost the lives of two scientists as well as his career. His claims are dismissed as mere aberrations of the deep, but Taylor knows what he saw, and when an opportunity to return to the trench to collect an unfossilized Meg tooth presents itself years later, he’s intent on retrieving it to prove his naysayers wrong. Instead, man’s presence in the abyss causes one of the creatures to escape — a pregnant female — and now the race is on to capture it.

On a top-secret dive into the Pacific Ocean’s deepest canyon, Jonas Taylor found himself face-to-face with the largest and most ferocious predator in the history of the animal kingdom. The sole survivor of the mission, Taylor is haunted by what he’s sure he saw but still can’t prove exists – Carcharodon megalodon, the massive mother of the great white shark. The average prehistoric Meg weighs in at twenty tons and could tear apart a Tyrannosaurus rex in seconds. Written off as a crackpot suffering from post-traumatic stress disorder, Taylor refuses to forget the depths that nearly cost him his life. With a Ph.D. in paleontology under his belt, Taylor spends years theorizing, lecturing, and writing about the possibility that Meg still feeds at the deepest levels of the sea. But it takes an old friend in need to get him to return to the water, and a hotshot female submarine pilot to dare him back into a high-tech miniature sub. Diving deeper than he ever has before, Taylor will face terror like he’s never imagined, and what he finds could turn the tides bloody red until the end of time. MEG is about to surface. When she does, nothing and no one is going to be safe, and Jonas must face his greatest fear once again.

Steve Alten is the NY Times bestselling author of 18 thrillers, including the MEG series. He is also the founder and director of the nonprofit Adopt-an-Author teen reading program. He is doing a limited number of interviews to support The MEG’s new release.

The Ghost of Lady Liberty

Pick Them, Choose Them, Love Them