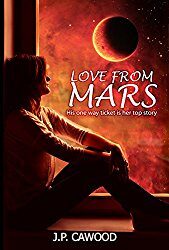 The book was emotional, spiritual and insightful with Sci-fi elements to it. What was surprising to me is how much it made me care for the characters, care for them to get together and live happily ever after, how much ever impossible that seemed. The characters are well-written, empathy-inducing 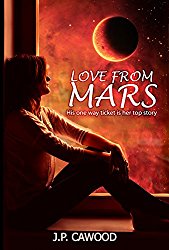 and engaging. It was a great read for me and the end packed a powerful punch.
The romance of the main characters, Emma and Ryan was believable to say the least. Their meeting, the way they fall in love and their emotional goodbye as he left for Mars was so real, it was easy to forget that it was a work of fiction. The description of the emotional moments was on point and the spiritual ones were all there for the right reasons and depicts that love transcends mere physical presence. It is a powerful message for the readers.
The only issue I had was with inclusion of her father’s story-line, I understood that it was important for her story arc but it did not feel important and did not resonate with me.
Overall, this book was a great read, with great characters, powerful romance and a valid ending. I give it 4/5 stars.

Six people have been chosen to colonize Mars, including the charismatic and noble Ryan Clarke. Emma, a headstrong reporter, meets Ryan at the Martian Six press conference. Despite the fact that he has a one-way ticket to another planet, they can’t resist their undeniable connection. When their secret affair is uncovered, they must suffer the consequences of the scandal they’ve unknowingly created. The day of the mission launch, their whirlwind romance is rocked by another shocking revelation. Can their love transcend all space and time?

JP Cawood has developed television series & pilots for Syfy Network, TLC, Investigation Discovery, Destination America, History Channel, Lifetime Movie Network, and Pivot/Participant. Now telling stories through books, JP writes science fiction/fantasy because the future is now and imagination is the key that unlocks all great mysteries. As a lifelong student of the mystical unknowns, JP has traveled the world in search of truth, beauty, and goodness. JP has lived in France, Britain, India, and many cities across America.

Aishwarya Girish. Is   from Bangalore, India.She has a Bachelors degree in Computer Science.  Currently she is pursuing her Masters in

After the Evil (A Jake Roberts Novel) (Volume 1) Book Review

The Lady in the Woods -Book review