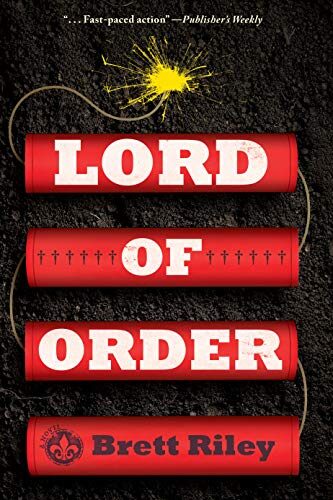 Brett RileyWow, what a concept!  Brett Riley has written a novel entitled ‘Lord of Order’ that is to me a cross between thriller and horror along with science fiction.  This is the story of what would happen if New Orleans were a prison city.  ‘Lord of Order’ is a futuristic futurist novel .  It keeps things and 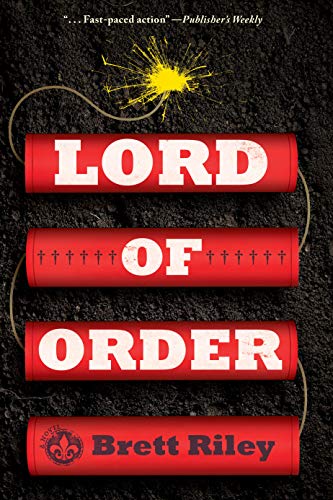 ideas of the past.  There are two to three groups in this story (Crusaders, Troublers and Conspirators).  It is also a book of having faith in yourself and your ideals, whether religious or political or social.  The main characters of Gabriel, Hobbes, and Boudreaux- Crusaders/ Chief Troubler- Stransky who have a lot in common, but will need to work through their differences in themselves and feelings of New Orleans.Brett Riley has written a novel that is set in the future, but has aspects of the past and the present, as keeping the names of famous sites, and the characters having jobs and chores as in colonial times like gatherers and lamplighters.  Professor Riley could use his novel in his courses to show comparisons and contrasts in setting and character.  ‘Lord of Order’ has some scenes that even fans of extreme horror movies would like to read.  Brett is a novelist that has the talent of showing and telling his story.  He is a very illustrative writer I could visually see the characters of the Crusaders building the wall along with all the Troublers chained and moaning and then the changes that occurred.  Also, as the reader I could see all the characters faces clearly and feel the fear of the Troublers and the hubris of the Crusaders.

The Author does have a different writing style .It makes it a little difficult to read some time. I don’t know why but he does not use Quotation marks.

Lord of Order is a book that could let us learn to always have faith for their Lord for there is only one supreme leader.

Long after the destruction of all electronic technology, the Bright Crusade rules the world as a fundamentalist Christian theocracy. Gabriel Troy is Lord of Order for the New Orleans Principality. For years, he and his deputies have fought to keep their city safe from the attacks of the Crusade’s relentless enemies, the Troublers—heretical guerillas who reject the Crusade’s rule and the church’s strict doctrines. As their crowning achievement, Troy’s forces capture the Troublers’ local leader. The city has never been more secure.


Alarming intelligence leaks from Washington: Supreme Crusader Matthew Rook plans to enact a Purge—the mass annihilation of everyone deemed a threat to the Crusade. Rook orders his forces to round up all but the blindly loyal and march them to New Orleans. Once the prisoners have been chained inside, the Crusaders will wall off the city and destroy the levees. The resulting deluge, reenacting the Biblical deluge of Noah’s time and the city’s devastation during Hurricane Katrina, will kill everyone inside.

Forced to choose between the Crusade and the city he has sworn to protect, Troy and five other conflicted conspirators gird for battle, fully aware that the looming apocalypse will demand horrific choices, test their faith, and require them to join forces with their sworn enemies.

Brett Riley is professor of English at the College of Southern Nevada. He grew up in southeastern Arkansas and earned his Ph.D. in contemporary American fiction and film at Louisiana State University. His short fiction has appeared in numerous publications including “Folio,” “The Wisconsin Review” and “The Baltimore Review“. Riley’s debut novel, “Comanche” was released in September 2020. He has also won numerous awards for screenwriting. Riley lives in Henderson, Nevada. –This text refers to the hardcover edition.

I’m Not Single, I Have a Dog  Dating Tales from the Bark Side