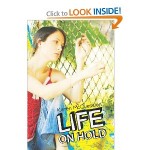 Reading Karen McQuestion’s Life On Hold is like travelling to a parallel world (parallel because it’s familiar) and hearing a good friend tell you a story that you’ve never heard before. The tone of Rae, the narrator and protagonist, is absolutely relaxed (though also filled with a spectrum of emotions), and so you want to keep hearing more and more.

Rae is the new girl at the high school, which has happened to her over and over again since her mother, Gina, loves change and moving around and since Rae doesn’t know who her father is. Despite this she manages to get good grades at school and always finds “people” with whom to hang out, since she learned long ago that having a best friend made for too much heartache when her mother suddenly decides to uproot them again. This year her people are Mason, a Japanese boy, and Kylie, who is very short but has amazing, blondish beautiful hair and a welcoming disposition.

Suddenly Rae is chosen by her principal, Mr. Smedley, to assist a new girl, Allison (when she’s just been at Whitman High for only a few months herself) in getting acquainted with the school. Allison’s mother and father have been burned to death in a fire and she’s living with an aunt and uncle now and dresses oddly, for high school, clutching a large patent leather purse instead of a backpack and wearing ensembles more suitable for someone who’s middle-aged. Allison has a number of very dark secrets that are slowly exposed during the course of the story, and Rae’s mother, Gina, befriends Allison and feels very sorry for her.

All of this takes place at a turning point in Rae’s life as she’s finally living in a city near her grandparents (whom she loves but with whom Gina doesn’t get along), and at Whitman High she meets Nick, a serious boyfriend. She’s also both trying to understand her mother (whose basic nature is different than hers) and persuading her to stay in one place so that she can finish high school and gain a sense of stability.

Karen McQuestion tells us that she writes without an outline, not knowing what will happen next (which is the truest form of creativity) and “has had literary aspirations since the third grade, when her teacher read her short story out loud to the rest of the class as an example of a job well done.” She understands intimate interactions between family members quite well (both the warmth and the horror) and evidences it in her tripping-off-the-tongue dialogue. Rae’s story is one of a young girl

beginning to come into her own individuality, from which we can all benefit. I recommend it highly to everyone, and especially to book clubs (where there’d be much to discuss about human nature) and teens!

Life On Hold by Karen McQuestion, published on April 1, 2011 by AmazonEncore, 186 pages.