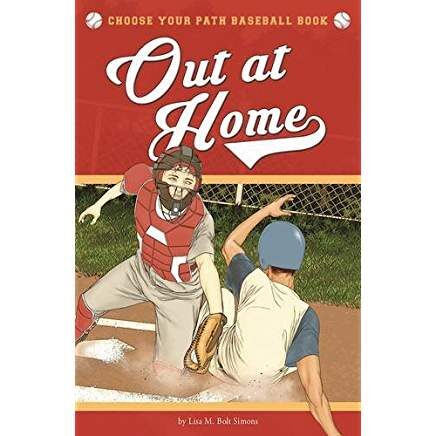 I have three “Choose your own path”books here Goal-Minded a Soccer Story,Out at Home Baseball and one about Hockey Save the Season!  They are all quite fun. If you are not familiar with the Choose your own path concept it’s time you familiarize yourself. When I was a younger Nerd I used to read this type of book but it was based on D&D.If you don’t know D&D I guess you’re not quite the Dork I am. Yep it’s Dungeons and Dragons. 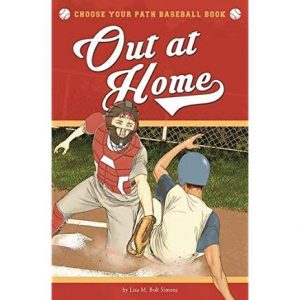 Anyway the Choose your own path is a fun way to read. It’s kind of like creating your own story. As you read you will be asked to make a decision.Depending on which way you Choose to go will determine the next page you read and what direction the story goes. The author added a little something to these books though.Depending on the decisions or choices you make you’re awarded points. The points are either in Confidence,Teamwork speed or skill. These attribute will show the type of person you become.

Although I was familiar with this type of book I wasn’t really prepared for the story theme of these books. I mistakenly thought they would be all about sports and maybe a single game. But to my surprise they were so much more. The books are part of a “Choose to Win “series.You’d think it was about winning the game but the way I interpret it is it’s about winning in life . These middle grade level books will  show you the consequences of making bad choices. To think about your next move.They are not so much about the Game but about life. I must admit I made a few of the wrong choices in the book and got a GAME OVER.

All Three of these books are a great addition to your kids library and an excellent way to get them thinking about the choices we make. Not to mention they are about sports which should get them interested to begin with.

Check out these books on Amazon

Goal minded  Save the Season   Out at Home

When I was a budding bibliophile in the early ’80s, I discovered a series that took my readership to an interactive place long before “interactive” was a buzz word: Choose Your Own Adventure. The 60+ books were written by different authors, but Edward Packard and R. A. Montgomery co-founded the series. Because these 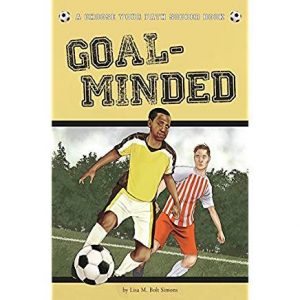 books had an interactive feature that hadn’t yet become popular even in computer games, they provided the reader with a unique twist. When I searched for “Choose Your Own Adventure,” favorite titles popped up: The Cave of Time, Journey Under the Sea, By Balloon to the Sahara.

Scroll ahead almost three decades to when I was not only a reader but also a writer. Through a mutual friend, I met an author/publisher named Ryan Jacobson who was reworking classic literature into an interactive Choose Your Path series called “Can You Survive?” I told Ryan I wanted to try writing one of these books, since I had been such a fan. He gave me Bram Stoker’s Dracula to read to get an idea of the format, and I was taken back to those days of choosing a page with anticipation, hoping I wouldn’t die, which, actually, was part of the fun.

Time ticked on, and the opportunity to rewrite a classic faded. But a couple of years later at a young writers’ conference, I ran into Ryan again; he asked if I’d be willing to write sports books that followed the “choose your path” format. I agreed, and we decided to try baseball, hockey, and soccer. I started writing the hockey book when I went camping in the Boundary Waters Canoe Area (MN) with my family. My daughter named one character, while my hockey-playing son and his friend helped me write about the game. I’ll never forget their engagement when I read the first scene out loud, ending with their two choices, and their choosing which path to follow. 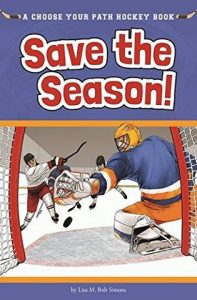 In the Choose Your Path books I write, the goal is to win the big game. The stakes aren’t as high as “death,” but who wants to lose a game? Ryan also added a unique feature that added more appeal to gamers: a point system. Points are determined at the beginning of the book, and then teamwork, confidence, skill, and speed points are awarded depending on the choices made. Although it’s a bit more challenging to write this kind of book, as both right choices and wrong choices must continue the story line, readers will be invested in not only the games but also in the subplots as they Choose to Win!

Out at Home (baseball)

Save the Season! (hockey)

Lisa M. Bolt Simons has been a writer for as long as she can remember and a teacher for over 20 years. She’s published over 20 children’s nonfiction books; and three middle grade “choose your path” sports novels. More books are forthcoming, and she’s working on several projects she’d like to see published someday. Both her nonfiction and fiction have been recognized with various accolades. Besides writing, she teaches the craziness of the English language to adult students from around the world. In her spare time, Lisa loves to read and scrapbook. She was a busy sports mom for over a decade, she loves dark chocolate, and she wishes she could travel more. Way more. Long bucket list. Originally from Colorado, she lives in Minnesota with her husband, while her boy/girl twins have started new chapters of their lives at colleges in Colorado and Minnesota.

The Most Ferocious of Creatures; by Chris Sykes – a Book Review