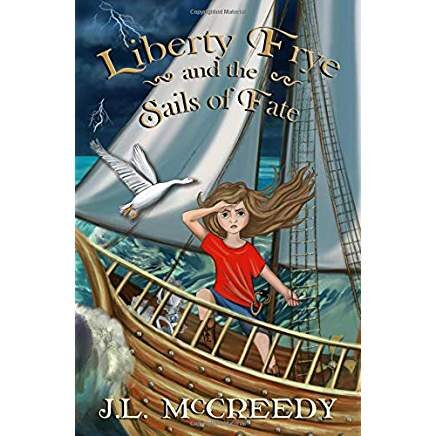 Well folks Liberty Frye and the Sails of Fate came out in 2016 but unfortunately I missed it then. But I have it now so…

When we last saw Liberty Frye (Libby to her friends) she was a ten year girl getting into and out of quite an adventure.(Check it out here) 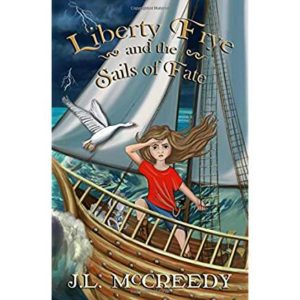 Ok so now she and her BFF Ginny are a couple of eleven year old’s. And yep still adventuring. This time though it seems they are somehow stuck somewhere in the South Pacific in 1871. Quite interesting considering they  were in modern day Mississippi a short time ago.So now they are time travelers.For her eleventh birthday Uncle Frank was only going to take her on a little cruise across the bay. Somehow they ended up on the other side of the world in a different century.

Now like the author herself tells you at the beginning of the book.”If you’re hoping for a tale of beautiful princesses and prancing ponies y

ou should close the book and walk away. This is another fun,exciting adventure in the Liberty Frye series.With the same Characters of uncle Frank and his pal Sal.Some great new characters in Kai a native boy around the same age as the girls. Although I think my favorite may be Sir Jasper the leader of the Rattus norvegicus

Another great read by J.L. McCreedy.Well written and thought out and well within the middle grade level.

If you remember from the first book Liberty discovered a family secret that changed her life quite a bit.She found out she has magical powers.She is quite simply a witch.In book two she begins to have a little more understanding of her powers with the helpful advice of BFF Ginny. Another fun adventure in the life of Liberty Frye!

J.L. McCreedy first learned a love of writing (and developed an incurable condition of wanderlust) while growing up in Southeast Asia as the child of missionaries. She holds a B.A. in English and a law degree, freelances as a writer and consultant for charitable organizations and, whenever possible, drags her splendid husband across the globe on ill-planned, shoestring adventures.

She is also the author of Liberty Frye and the Witches of Hessen and The Orphan of Torundi.

Please visit her at www.TongaTime.com.

The Secret In Their Eyes book review