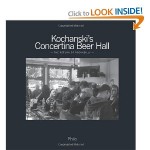 the back of this large establishment. Both the “new” rockabilly and the old-fashioned polka are represented.

But now we have even more – a visual account of this night-darkened club. Philip Kassner, who’s been a photographer for forty years but whose photo on the back cover shows us a youthful-looking beret-topped bohemian, took on the challenge of documenting the new (but to most of the world, still a secret) concertina hall. “Present day rockabilly is even better now…..I enjoyed the photographic challenge, it was like capturing imagery from the interior of a grotto……The senior patrons of Altenberg’s have been been retrieved and can easily out-dance me. Some of them come in on non-polka nights to enjoy the rockabilly music.”

Andy Kochanski, the new owner, writes, “The building was built in 1900, when everything around it was celery fields……As with many of the taverns from the good ol’ days, music was a part of the bar life, just as it is still here today. Within the confines of these walls, polka was and is still part of the driving force that makes this institution what it is today. The musical genres have been expanded to include Rockabilly, Blues, Bluegrass, Country and Western, Honky-tonk, Punk, and of course Surf music…..Even though this building gives off a special vibe, if it weren’t for friends and family who have helped me, the very talented bands that play here, and the wonderful people that come here, this place would just be an old building.”

With the edge of Diane Arbus but not the ominous and destructive feeling of her photos, Kassner shows us Kent Knapp, ‘the Colonel” – “He is a blacksmith, large and muscular. No one can get a bass to resonate the way he does”; the Brew City Bombshells, a burlesque act, and one of its members, Raven Nevermore; Delilah De Wylde and the Lost Boys, and in one of their photos Delilah looks almost like an opera star, trying to drag her bass towards her; Mary Rogers from The Uptown Savages coolly playing her saxophone, and a variety of other performers. Kassner also shows us spectators: a Beer Drinker, with his dark bottle held up to his lips and his hollow stare moving off to the left; owner Andy Kochanski standing in front of a wild photo of himself; Brush Cut, the profile of an older man with a short haircut, and even the Untitled photo that’s a “Documentation of the last cigarette legally smoked within a city of Milwaukee tavern” that depicts an older woman lighting up her cig with the people and art on the walls behind her looking like ghosts.

Most of the photos are black and white, with “the appearance of sensitive but grainy 35 mm film.” Shot with a Canon 50D (“Ten times more sensitive than a film camera or common digital camera of that era”) but nonetheless “only a few of them had sufficient illumination for me to print color,” what began as as great enthusiasm in showing “the scene”, often in darkness, changed when Kassner refused to use a flash even though “the stage was illuminated by just a few dim, red lightbulbs” because “It would have completely spoiled the atmosphere and have been entirely too disruptive.” But with just “a minimal amount of photo enhancement” Kassner has been successful in capturing, say, the sparkling background contrasted to the effort of the hard blowing of Big Al Groth and his saxophone from the Reverend Raven and the Chain Smokin’ Altar Boys band, or the attentive but sad look of Couple, a man in a suit and hat wearing glasses and his girlfriend at his side watching the action with games and posters lit up behind them.

This book of photos is an achievement in mood – gaiety, confidence, difficulty, burden, enjoyment, sweetness, fun and the usually ever-present “next day” finally put aside for awhile. The same can be said of Philip Kassner’s photos as he says of Matt Tyner and his “one of a kind guitar” – that “You don’t see too many of ’em” anymore. An unusual and heart-felt book.

Kochanski’s Concertina Beer Hall: The Return Of Rockabilly, a book of photos by Philip Kassner published by CreateSpace on December 8, 2011, 70 pages.