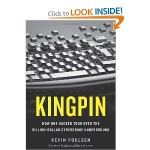 Max “Vision” Butler’s life is pockmarked with extended stays in prison, including one that he resents (for not having turned in Harrison, a friend). His are white collar computer crimes, working on both sides of the fence (as sometimes he’s helped the FBI). Max started out at Bishop Kelly Catholic High School in Boise, Idaho, met his first girlfriend, Amy, and attended Bosie State University – normal enough beginnings, but then a Secret Service agent caught him “phracking” – siphoning off free long-distance cards – and when Max wanted to break up with Amy he threatened her life, trying to choke her to death.

After five years in prison for phracking, Max visited his high school geek friends who’d settled on the West Coast in Silicon Valley where they banded together as The Hungry Programmers After a $300,000 lawsuit filed against him by the Software Publishers Association (that got settled for $3,500) Max did computer consulting and married a new amour, Kimi, in Washington. He got in trouble and went to prison again, with the prosecutor saying “Max pretended to be an FBI informant while secretly committing crimes against the U.S. government. It was worse that if he had never co-operated at all” when he refused to snitch on his friend Harrison.

After Max got out again he met Chris Aragon, a fellow hacker (who’d also done actual bank robberies) and went from Kimi (who wanted a divorce) to Charity. From Chris he learned what had changed from the 1980s to the 2000s: “There was a time when crooks could literally pull credit card numbers from the trash by dumpster-diving for receipts or the carbon-paper slips left over from the retailers’ sliding imprint machines. Now mechanical imprinting was dead, and Visa and Mastercard insisted that receipts not include full credit card account numbers. Even if you got the numbers, that was no longer enough to make counterfeit cards.” Chris developed a way in which credit cards could be used to charge an amount to some anonymous person somewhere else, and Max devised a way to steal electronically from those who had stolen credit cards (in the hundreds of thousands). Then Chris created “new” credit cards with a machine that matched those already in existence that could be used to buy items that were sold on Ebay. He also created drivers’ licenses for high-end purchase. The FBI raided Max’s house (with a search warrant) but Max was a few steps ahead of them and hid some of his computers. When Chris got arrested Max just went into business for himself.

In 2005 Max (as Iceman) launched Cardmasters.com, replete with a section translated into Russian for Easterners, and he thrived. Reading Sun Tzo’s The Art Of War as a “hacking manual,” he infiltrated his competitors and started Carders Market (where supposedly criminals could “just talk” about cybercrime) that was hosted in Iran. He attacked and absorbed rival forums (as Sun Tzo would have done). Web wars, carder court, and all sorts of struggles ensued, until Special Agent Michael Schuler appeared on the scene, a legend among the bureau’s cybercrime agents. This and the arrest of Jonathan

Giannone, a carder Max had discovered as a teenager, began Max’s downfall.

Right before sentencing, Max wrote to Judge Maurice Cohill, “I don’t believe further prison time in my case will help anyone. I don’t think it is necessary because all I want to do is help……I have a lot of regrets, but I think my essential failing was that I lost touch with the accountability and responsibility that comes with being a member of society.” Max went back to prison (for 13 years) and would have to pay $27.5 million in restitution, but the sentencing could have been far more harsh.

To those not acquainted with technology, Kingpin can be a bit difficult to read in spots, although the author, Kevin Poulsen, a senior editor at Wired.com who oversees cybercrime, privacy, and political coverage, tries to make it as simple as possible. Max’s story, in all of its details that one couldn’t even begin to write about in this review, is sad, because even though he exposed an internet crime underground, his genius could have been used for the good of everyone. An interesting story about an unusual man!

My Way to Making Friends