L.K. Hingey   What would the world look like after World War III?  L.K. Hingey has written such a book.  ‘Kimber’ which is book one of the ‘Elyrian Chronicles’ is the story of Kimber, a person who is half snake and half human.  She lives along with her friends and ‘family’ in an underground city named Inanna in the year 2209.  Kimber has a special friend in a human by the name of Caleb, but there are new rules coming in the city of Inanna and she is going to find out why things to have to change.  Kimber and another half snake/human by the name of Tristan travel to the surface to search for information in this first of a series of novels. 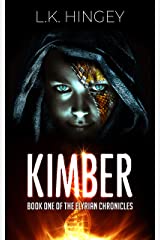 has written a child/young adult science fiction novel that lets the reader see vividly what the country could be like after a catastrophic war has occurred and when their were various scientific and natural occurrences could and can affect human life as well as other species through governmental/military activities.

is a very descriptive novel right from the beginning to the end of Book one.  I have several scenes that I liked that hold the reader captivated to the end. One has Kimber climbing the elevator shaft. Another when she and Caleb are in the underground room with the special moss (lichen) along with what may happen with them, and the journey on the surface with Tristan and seeing how everyone seemed to have lived in previous centuries, when they see how some products seemed to survive like marshmallows an SPAM meat product.  L.K. Hingey is a writer that shows and tells what the characters are thinking and doing in the whole story.  She gives vivid details of the characters from dealing with many natural and scientific events that can and could effect human/animal life. ‘Kimber’ is a fanastic book one and cannot wait for book two.  This is a novel that could start discussion groups in a language arts/English course. Or as a social studies/science class when discussing the ramifications of World War III and social order.2020ISBN: 9-798647754424337 pages

AUTHOR OF THE NEW BOOK KIMBER: Book One of The Elyrian Chronicles

So, what is your new Novel  KIMBER: Book One of The Elyrian Chronicles is all about:

L.K. Hingey: KIMBER is a dystopian young adult novel set in the year 2209 that takes readers from the depths of an underground city to the surface of a world scarred by war and ravaged solar winds. Kimber is one of 23 of a brand-new subspecies of humans called Auroras.They were  secretly bred by the government with the genomes of Earth’s most radiation resistant animals. The book follows Kimber on her journey through the wasteland of post-World War III America in search of proof of the inhuman genetic experimentation that could free the Auroreans from a life of lies and servitude.

Who do you think The Elyrian Chronicles will appeal to ?

Hingey: I think KIMBER and the subsequent books in the series to come will appeal to fans of The Hunger Games, Divergent, and The Maze Runner trilogies. Also, to the fans of the movie Avatar! Anyone who likes suspense, action, romance, immersive worlds, or becoming fiercely attached to characters, should definitely check out this fun new dystopian series!

Where did you draw your inspiration when creating The Elyrian Chronicles?

Hingey: I draw inspiration from the amazing world around us. Life is full of beauty and wonder,love and friendship, and sometimes heartbreak and terror. After my spinal injury and separation

from the military, I took five months to backpack the Appalachian Mountains. After years of hardship, it was the first time I could truly let my mind wander. Creativity blossomed as my husky, Colefax and I hiked over 1,800 miles. As we watched spring turn into summer, and summer turn into fall, the idea for KIMBER was born and has stuck with me ever since.

What are some of the underlying themes that readers may pick up on in KIMBER?

Hingey: My favorite novels are the ones that not only have strong character development and immersive scenery but are layered with deeper meaning. I spent countless hours researching the science that is interwoven into Kimber’s story. I then did my best to lace a high degree of scientific plausibility with deeper themes: themes that prod and explore the complex world around us, such as government, social movements, and the institution of religion.

What’s next in The Elyrian Chronicles series?

L.K. Hingey was born, raised, and enlisted into the U.S. Army out of Detroit, Michigan. She graduated from the University of North Dakota in 2012 as a private and commercial helicopter pilot with a Bachelor of Science in Aeronautics, before commissioning as a U.S. Army officer. She has since medically retired from the military and continues the Army lifestyle as an Active Duty spouse. She resides with her husband, Jonathon, who is U.S. Army Blackhawk pilot.

L.K.’s many interests include her dogs, fitness, backpacking, traveling, and writing.

KIMBER is available on Amazon and through all major booksellers.