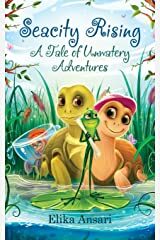 If animals could talk what would they say about what is happening to their world?
This is a story of friendship at all costs.  Elika Ansari has written an upper elementary level story entitled ‘Seacity Rising a Tale of Unwatery Adventures’.  With adorable colorful illustrations that bring the animals to life by the talented Olsi Tola.This is a chapter book that takes place as the book states in the very depths of Seacity Pond.  The main character is a frog by the name

of Babuk, the frog and he has many friends in Seacity from Princess Dolores to her father, The King as well as Anaba and Anoki.  Babuk and his watery friends meet new friends on these adventures.  Babuk, the frog one day notices that his surroundings are changing and he starts to ask questions what is happening and his work begins.  He and his friends start on a journey that will take them to have a better understanding of their environment and the environment above Seacity.  Babuk and all his friends will learn to make adaptations.
‘Seacity Rising’ is a good book for anyone that cares about animals and their environment.  It’s a great tool to teach or just introduce ecology and biology to young students, for example as a science projects creating an aquarium or even a terrarium could be made. It brings the subject Climate change and it’s impact on the ecosystem too the younger readers .This is also a good book for social studies as well as language arts and art classes.  The pictures could be enlarged and then colored to fit the mood of the scene portrayed, as well as discussing options on cleaning up pollution in the water and on land.  ‘Seacity Rising’ is a good read for learning how to make friends and working together.
Seacity Rising A Tale of Unwatery Adventures

When the underwater animals of Seacity pond learn that their home is in danger, they decide to investigate further by doing something no one has ever done before – go up to land to seek the answers they need. An unlikely team of two royal turtles, a genius goldfish and a timorous frog are then assembled to embark on a series of adventures. Whether they are racing the fastest tortoise on earth, falling in love with traveling mice theater, or bringing peace to warring ant colonies, each unique experience is taking the group of friends closer to the heart of what is really going on. But do you think will they make it back in time to save Seacity before the Winter’s Slumber?

Elika Ansari is a writer, social scientist, and humanitarian professional. She has been working in NGOs in refugee camps for the past two years, including what has been recently described as ‘the world’s worst refugee camp’, and as such she has had the (mis)fortune of hearing many touching stories about hardship and perseverance. She tries to focus her writing on globally relevant issues with the hope of one day making a difference through the stroke of the pen (or click of the keyboard), however small that may be. She loves writing anything from essays and articles to children’s fiction, and she does not shy away from the occasional rants about society’s downfalls. Ansari has published 100+ reviews, articles, and short stories, and her debut children’s book, ‘Seacity Rising: A Tale of Unwatery Adventures’  by Black Rose Writing is available now at Amazon