Thor Freudenthal makes his feature-film directorial debut with this adaptation of Lois Duncan’s children’s book HOTEL FOR DOGS. Sixteen-year old Andi (Emma Roberts) and her younger brother, Bruce (Jake T. Austin), are orphans living with their foster parents (Lisa Kudrow and Kevin Dillon), two washed-up musicians. Desperate to keep what’s left of their family together, Andi and Bruce have secretly been caring for their family dog, Friday, on the sly for the last few years. When they follow their beloved pet into an abandoned hotel and find stray dogs living there, Andi and Bruce decide to round up all the strays in the city and expand their family. With the help of Dave (Johnny Simmons) and Heather (Kyla Pratt), two teens who work at the local pet store, they transform the abandoned hotel into a canine wonderland, using young Bruce’s skills as an inventor to make an automated feeding system, doggie restrooms, and some fun amusements, such as a car-ride simulation and a fetching machine. But if Animal Control has their way, all the residents of the hotel will be taken to the pound, and it’s up to Andi and Bruce to save their new family. 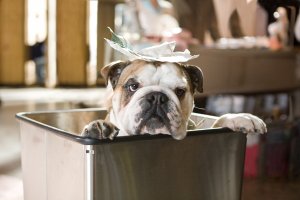 If you love dogs you will love Hotel For Dogs. Hotel For Dogs is based on Lois Duncan’s book of the same name. It’s a good caper movie, featuring a teen girl and her brother’s solution to keeping their dog in spite of living in a foster home. The teenage actors are impressive and supported by stars such as Lisa Kudrow and Don Cheadle. But the real stars are the dogs. They are so cute! The movie is fun and touching. Another thing I liked about it was the lack of crude humor (except a few dog bodily function jokes), and also the lack of romance. I think it is appropriate for most ages 6 and older in spite of its PG rating for mild thematic elements, language, and some crude humor. You can watch the trailer here.