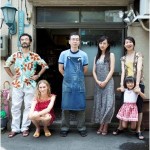 Hospitalite, released on 9/9/12 by Film Movement and diercted by Koji Fukada, is billed as a comedy but is really about painful secrets and hidden agendas. Fukada tells us “Even though 1/10 of the population of some Japanese communities is foreigners, people think that the fact that foreigners are increasing is scary because they don’t know them very well and there are not many opportunities to meet them.” So there is an “Exclusivity” policy in many Japanese neighborhoods, including the neighborhood of our protagonist Mikio Kabayashi (Kenji Yamaguchi) who runs a (very small) rotary printing press from where he lives with his partner Natsuki (Kiki Sugino) and his child from his first marriage, Eriko (Erika Ono).

At first all is well except that the family’s peach-faced lovebird Pea has flown away, and a lost poster is printed up on the family press. An odd man who is a self-proclaimed slacker, Kagawa (Kanji Furatachi), comes by and tells the family where he’s seen Pea up in the trees. At the same time, a press worker is taken ill and has to go to the hospital for tests, so Kagawa, who seems to know his way around the machines, is temporarily hired, for room and board. Soon Kagawa brings in his “wife” Annabelle (Bryerly Long), who teaches foreign dances like the samba and claims to be from Brazil, but then tells someone else she’s from Bosnia.

Kagawa and Annabelle are not who they appear to be, and start taking over Mikio Kabayashi’s life. Then Mikio and Natsuki have secrets too, even from each other, which Kagawa uses to pit them against each other. Natsuki feels especially bad that Annabelle takes over in teaching Eriko English, which she had been doing prior to Annabelle’s arrival. Then the community is amazed as more and more foreigners enter the Kabayashi home and set up camp (even giving Natsuki a birthday party), but I’ll leave it to the viewer to find out

The plot unfolds slowly and we never guess what’s happening until the very end. Director Fukada (for whom this Japanese film won many International Film Festival awards) started out doing a film about family-run rotary presses in Japan (which he was going to call Rotary), but then took on the topic of “removal” (a movement that tries to remove foreigners from a neighborhood “to not damage the harmony of community”). Talking about Japan, Fukada writes “the country is pretty much a single race country, so I hope more immigrants come and get mixed in more. It’s simply fun and interesting to know different cultures and points of view.

Natural acting and likeable characters (even the “villains”) make this an enjoyable film. The added dimension of addressing the anti-foreigners policy reminds us that not all countries welcome everyone, as does America.

Christina Zawadiwsky is Ukrainian-American, born in New York City, has a degree in Fine Arts, and is a poet, artist, journalist,

critic and TV producer. She has received a National Endowment For The Arts award, two Wisconsin Arts Board awards, a Co-Ordinating Council Of Literary Magazines Award, and an Art Futures Award, among other honors. She was the originator and producer of Where The Waters Meet, a local TV series created to facilitate the voices of artists of all genres in the media, for which she won two national and twenty local awards, including a Commitment To Community Television Award. She is also a contributing editor to the annual Pushcart Prize Anthology, the recipient of an Outstanding Achievement Award from the Wisconsin Library Association, and has published four books of poetry. She has reviewed music for Music Room Reviews, films for Movie Room Reviews, Movie Scribes, and FilmSay, and is currently reviewing books and films online for Book Room Reviews at www.bookroomreviews.com while also showing artwork professionally.