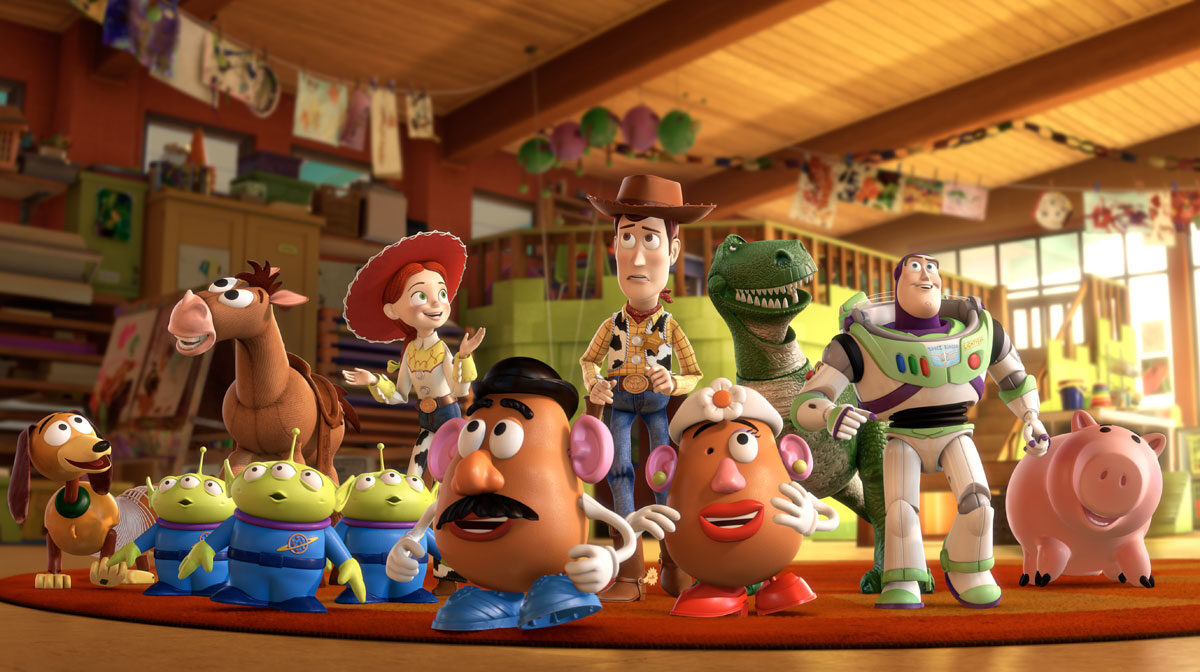 With the holidays right around the corner, there’s going to be a lot of little family members running underfoot as families celebrate, eat, and share gifts with each other. With that in mind, we picked out the best Pixar films to watch or give as gifts during the holidays, films that everyone in the family is guaranteed to enjoy – here are the six at the top of the list:
Toy Story 3

There’s a special place in Pixar’s heart for the Toy Story series, the first two films turning Pixar into an industry leader in both narrative forms and visual splendor, filling lush, detailed CGI worlds with three-dimensional characters and touching stories about childhood and growing up. Toy Story 3 is the culmination of Pixar’s best traits, an emotional tale about moving on and letting go, a decidedly mature film for one of America’s biggest film series, in terms of child appeal and Disney Store merchandising potential. It’s a beautiful farewell (we hope) to a ground-breaking franchise, ending the Toy Story trilogy on a high note.

Another kid’s movie that’s not really a kid’s movie, Up tells the story of a grumpy old man coming to terms with the death of his wife. Opening with the most emotionally affecting montage ever produced, Up begins on an emotional high and then dips into comic absurdity to reveal simple truths about human nature, taking its protagonist and a neighborhood kid halfway across the world (in the company of a talking dog, nonetheless) to do so. Colorful and contemplative, Up is a surprisingly inept existential film, easily the most ambitious project Pixar’s ever produced.

Although we can pretend to have fancy gadgets, fast cars, and other superhero-like qualities with HobbyTron toys and video games, The Incredibles brings the idea of the modern superhero to life, showing us a world where superheroes have already conquered and fallen, now living everyday, middle-class American lives. That is, until a new supervillian arrives on the scene, turning The Incredibles into the most action-packed film in Pixar’s catalog. Need a film to quiet the kids with big explosions, funny characters, and awesome superpowers? This is the family movie you’re looking for.

How does a rat in France who wants to become a five-star chef realize his dream? This is the question Ratatouille poses (at least on the surface), a film often considered one of the most unique animal-centric kid’s films ever made. Despite occasionally ham-fisting its message of “anybody can become anything”, Ratatouille’s clear passion for cooking and dedication to creating interesting, layered characters make it one of Pixar’s most memorable films, despite starring a small rodent scavenger. For the Club Penguin lovers in the family, Ratatouille is a perfect animal-themed, food-filled movie to give as a gift.

Pixar’s most philosophical film opens with one of the most beautiful CGI sequences ever seen, showing a desolate Earth wasteland inhabited by one silent, lonely little robot. Part social commentary, part love story, and part warning to the world, WALL-E eventually peters out in its second half, but remains a powerful tale of environmental neglect and selfish consumerism, a scathing commentary one never expects to see in a kid’s film.

Many Pixar fans note Finding Nemo as their personal favorite (and grossing $921 million upon its release in 2003, by far their most successful at the box office), thanks to its wonderous underwater setting and story more relatable to a parent’s life than a child’s. It’s arguably the funniest Pixar movie (right up there with Monsters Inc.), and its simplistic story allows the visuals and personality to take the front seat. With a recently announced sequel going into production, nostalgia for Finding Nemo is peaking, making this winter a perfect time to revisit the story of Nemo, Dory, and Marlin.

By Allison Preston. Allison is an avid shopper and an experienced writer with a passion for deals and coupons and for saving her readers money. She currently writes for leading coupon and online promo code site bluepromocode.com based in Santa Monica, California.

Online Shopping : A One Stop Shop