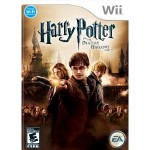 Harry Potter fans may be sad about the fact that the final film in the movie franchise has now been release, but Potter lore can carry on indefinitely thanks to the July 12, 2011 video game release of Harry Potter and the Deathly Hallows: Part 2 for the Nintendo Wii, Rated E-10+.

The following are product features for this adventure game:

We are excited to offer one reader a copy of the new Harry Potter and the Deathly Hallows: Part 2 Nintendo Wii game.

*Winner will be chosen by Random.Org

*US and Canada entries only No P.O. Box

*I follow all FTC rules and requirements and all my opinions are honest. The review and giveaway product were provided by the business or PR agency.