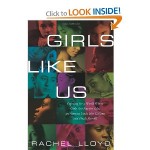 “There can be no keener revelation of a society’s soul than the way in which it treats its children” – Nelson Mandela. Many Americans (who think that the sexual slave trade in our country has only to do with foreigners in chains) would be shocked to find out that this “treatment of children” include girls like Danielle, eleven years old and wearing a cheap pink glass heart given to her by her “boyfriend,” age 29, who is pimping her out via Craigslist (the use of the computer keeps the male clients form having to walk around searching in tawdry places) right in New York City.

Rachel Lloyd, originally from a dysfunctional home in Great Britain and a sexual exploitation victim herself, is the founder of GEMS, Girls Educational And Mentoring Services, and was a leading advocate for the Safe Harbor For Exploited Youth, which made New York the first state to protect, not prosecute, sexually exploited children. In Girls Like Us she explains the reasons young girls are thrust into the sex industry at an early age. Some are kidnapped but most have been taken from abusive homes and placed in even worse foster homes from which they run away and the men who find them are initially sweet and generous towards them and give them the impression that they’re being loved and/or are in a substitute family (with other prostituted girls, with all of them “telling” on each other for the most minor infractions). This creates a “justified” modern day slave system which, before the Safe Harbor law, made desperate and literally hungry young girls seem to have “chosen” these fates. “There are pimps who are sophisticated and savy…. There are pimps who are clearly sociopaths…. Pimps can be male, female, or transgendered and come in all races and ethnicities, especially in different areas of the commercial sex industry such as escort agencies, brothels, and strip clubs.”

Between telling us the stories of American girls in this situation Rachel tells us her own story, which happened when she was 17. Dealing with a mother who was drunk daily and who often tried to commit suicide (although now she has stopped drinking and can finally relate to Rachel) and trying to numb the pain of being left first by Rachel’s father and then by her mother’s other boyfriends, Rachel impulsively left for Germany with a group of girls and very little money. Soon she had nothing to eat and couldn’t pay the rent or get employment because she was underage, and one day she passed a strip club that proclaimed Girls Girls Girls and realized that she was a girl and she could be paid to dance. However she had to do more than dance to keep herself alive, and telling her story to young girls in New York City, where she now works and resides, helps them open up and tell their own stories, of which they’re ashamed. Because of the shame they keep returning to the “other” world where they’re at least accepted, as opposed to being in the rest of the world where they’re treated as “the lowest of the low.”

Another important part of this world is violence, where girls get beaten half-to-death by pimps but stay with them because they have nowhere to go. “I will not cry, I’ll make them drink/When I make love, it won’t be me/And if they hurt me, I’ll just close my eyes” are lyrics from the song The Movie In My Mind by Miss Saigon. Most of us have fathers, brothers or other male relatives who would protect us, but these girls, to whom pimps are their families, don’t. Describing having to stand in the doorway of a strip club in Germany to lure in customers, Rachel Lloyd writes “A middle-aged couple walks past and the woman gives me the type of look reserved for child molesters and people who kill small kittens. It stays for a minute, but I’m used to it and have built up my defenses. I look her dead in her face and laugh, ‘You want something?’ She looks away quickly as if meeting my eyes would turn her, Medusa-like, into the awful person I clearly am.” Rachel also writes that the men who told her she was too smart and pretty to be living this life would still want sex from her anyway. “In the beginning, I believed them, feeling hopeful again, finding myself believing that yes, I can do something else. But I’ll learn

quickly that in the end they’re all the same, and that despite all their dream-weaving, they’ll still want something from you…. After a while I’ll learn not to be hurt by any of it, to stay numb, stay drunk, stay high. Focus on my books, my crossword puzzles, smile and ignore them; pretend they don’t exist.”

When Rachel Lloyd came to New York City she began working for the Little Sister Project and was given flyers to hand-out to women in all the downtown strip clubs and peep shows. She was propositioned at each place and treated as if she too were “an object for purchasing.” No one outside of “the life” wanted to know about men who buy women and/or profit from this work. “There is an underlying belief that men have needs, and that sometimes these needs may be legitimately, if not legally, fulfilled by purchasing someone.” Most sex industry children and teens have experienced “rapes, gang rapes, guns in their faces, beatings, sadistic acts, kidnapping – all at the hands of the johns.” About a girl, Sequuoia, who was severely beaten up, Rachel Lloyd muses, “Somewhere out there, there’s a man who beat a child nearly to death and left her by the side of the road. I wonder about this man, what he does for a living, if he has a girlfriend, if he has children of his own. I wonder if anyone in his ‘real’ life suspects what kind of man he is. I wonder when, not if, he’ll do it again to another girl whom he views as disposable property. And I wonder if she, like Sequioa, will survive, anf if anyone will notice if she doesn’t.”

So what is the answer? More courageous women like Rachel Lloyd who start non-profit organizations like GEMS who advocate new laws and offer counseling and health care. More people who write books that tell the rest of the world what’s really going on. And as Rachel Lloyd tells us at the end of her book, “I had no idea just how much I’d enjoy walking through the doors every day to learn from and grow with some of the smartest, funniest, strongest, most resilient girls I would ever hope to meet.” I highly recommend Girls Like Us!

Christina Zawadiwsky is Ukrainian-American, born in New York City, has a degree in Fine Arts, and is a poet, artist, journalist and TV producer. She has received a National Endowment for the Arts Award, two Wisconsin Arts Boards Awards, a Co-Ordinating Council of Literary Magazines Writers Award, and an Art Futures Award, among other honors. She was the originator and producer of Where The Waters Meet, a local TV series created to facilitate the voices of artists of all genres in the media, for which she won two national and twenty local awards, including a Commitment to Community Television Award. She is also a contributing editor to the annual Pushcart Prize Anthology, the recipient of an Outstanding Achievement Award from the Wisconsin Library Association, and has published four books of poetry. She currently reviews movies for , music for , and books for http://www.bookroomreviews.com