The Ghost of You and Me

This is a clean young adult romance stand alone novel that reads like contemporary drama romance and has just a touch of magical realism.

I absolutely loved this book. The grief, the love, the longing, the guilt, the friendship and so many more emotions explained so perfectly. The 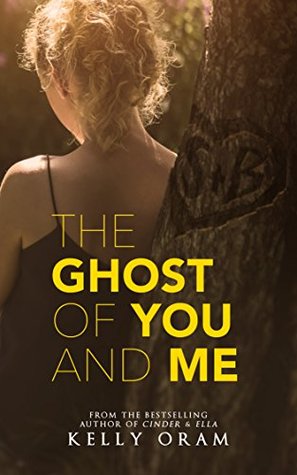 characters are all great. Bailey, even though beautiful and popular, was still very relatable in her emotions and responses. Spencer was just adorable, a description of the most supportive boyfriend. Wes was the typical sexy brooding guy the girl eventually falls for but with a deep vulnerability to him. The supporting characters were also essential and contributing to the story and to the protagonists.
The only thing that bothered me was that Bailey seemed smart enough but still didn’t come to the conclusion that Wes was acting that way because he was in love with her and not hated her, although maybe that was because of her young age and the cancer was a bit of an overkill but still played out beautifully, being essential to establish the character of Wes. The paranormal element also was very crucial for the story.
In conclusion, this is a great book about coping with loss and learning to love again, also not letting the guilt consume you. I give it 4.5/5

The Ghost of You and Me by Kelly Oram

How do you tell someone who hates you and blames you for the death of his best friend that you miss him?

From the bestselling teen and young adult author of Cinder & Ella comes a new heart-wrenching romance sure to bring all the feels.

The tragic death of Spencer Schott unravels the lives of the two people he loved most—his girlfriend, Bailey, and his best friend, Wes. Secrets and guilt from that fateful night keep both Bailey and Wes from overcoming Spencer’s loss and moving on with their lives.

Now, nearly a year later, both Bailey and Wes are still so broken over what happened that Spencer can’t find peace in the afterlife. In order to put his soul to rest, he’s given one chance to come back and set things right…even if that means setting up his girlfriend with his best friend.

With the emotional resonance of Jellicoe Road and the magical realism of The Lovely Bones, The Ghost of You and Me is a story about overcoming grief, finding redemption for past mistakes, and the healing power of friendship and love. Fans of John Green, Sarah Dessen, and Nicholas Sparks are sure to love this haunting new tale from Kelly Oram.

This is a clean young adult romance stand alone novel that reads like contemporary drama romance and has just a touch of magical realism.

I open the door and slam into a solid chest. Strong hands grip my arms to steady me, and they don’t let go. I know the hands are Wes’s without having to look. “Are you okay?” he asks.

At first, I’m comforted by his presence. His smell is familiar, and the heat of his tall, lean body feels like it could thaw my frozen heart. For a split second, I melt against him. His arms come around me as if holding me is as natural to him as breathing. For a second, everything is right in my pathetic world. For a second, I’m alive again.

My head jerks up at the sound of my name, and reality catches up with me. I scramble out of his embrace, attempting to swallow back my panic. He’s watching me, waiting for an answer. I haven’t spoken to him since the funeral, and I’m not sure I can do it now. It takes me a minute to find my voice, and when I do, I blurt out, “What are you doing here?”

He sucks in a breath through his nose as he steps back, gripping the strap of a bag slung over his shoulder. Seeing the backpack, my jaw drops. “Are you coming back to school?”

The genuine horror in my voice makes him flinch. There’d been a bit of light in his eyes, but it’s gone now. His face closes off. “No, I’m not coming back to school here.”

He adjusts that strap again, then switches the backpack to his other shoulder while glaring at the ground. I’ve offended him. Or maybe he just still hates me. I wouldn’t blame him. I got his best friend killed, after all. I hate me.

Seeing him reminds me of that night all over again. The events replay in my mind with vivid detail. Everything from finding Wes and stopping him from doing something unthinkable, to the kiss, to the fight, and finally the accident and Wes holding me back while paramedics did their best to try and save Spencer’s life.

One look at his face, and I can tell Wes is thinking about the same events. He closes his eyes and takes a breath. When he looks at me again, his expression has smoothed out. “How are you?” he asks. “You know…today.”

I swallow back a lump of emotion. I’m not surprised that Wes knows today is Spencer’s and my anniversary, but his acknowledgement of it feels like a knife in my heart. Why does he care? He hated that Spencer and I were together, and he used to get so cranky on this day every year.

“What’s today?” someone behind me murmurs. “It’s not the anniversary of Spencer’s death. That’s not for a couple weeks.”

A crowd of students have gathered to watch the drama. I don’t know who spoke, but I wish I could make them all disappear. Could people be any more tactless? Why can’t they just mind their own business?

When my eyes start to burn, I turn to leave. I can’t stand here any longer.

Wes puts a hand on my shoulder to stop me. “Bay, wait.”

I freeze. Aside from that night, Wes hasn’t used my nickname since I got together with Spencer and he started hating me for stealing his best friend.

Wes lets me go and rubs a hand over his head. “Sorry. I just—we should really talk.”

“Don’t.” With a quivering voice and stinging eyes, I whisper, “I can’t do this. Not today.” Maybe not ever.

I can’t take it anymore. I can’t stare into those knowing eyes for another second. My guilt is bad enough without seeing his sadness and anger.

Wes doesn’t say anything as I leave, doesn’t try to stop me. I head straight for my car and don’t care if I get in trouble for leaving. All that matters is getting far, far away from here. I’m not really running from Wes. I’m running from the past. Running from myself. Those are two things I will never escape, but I run anyway.

Kelly Oram wrote her first novel at age fifteen–a fan fiction about her favorite music group, The Backstreet Boys, for which her family and friends still tease her. She’s obsessed with reading, talks way too much, and likes to eat frosting by the spoonful. She lives outside of Phoenix, Arizona with her husband, four children, and her cat, Mr. Darcy.