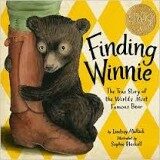 “Finding Winnie: the true story of the world’s most famous bear,” by Lindsay Mattick, Sophie Blackall

A Book Review by Alexandra Roth

When I was in high school, we had to do a project on something Canadian that made some sort of impact in the world. I did mine on the story of Winnie-the-Pooh and how this bear would influence A A Milne and his son to the stories that made Winnie a household name. One thing many do not know is that the bear is female and was saved from being killed from a Canadian vet, Harry Colebourn, that was serving in the war. This book has come out a few years later and found it recently. I fell in love with this story when I researched it. 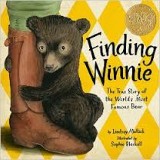 This book is told by Harry’s granddaughter to her son about him and his connection to the bear. At the back of the book when the story is done there is a few photos of Harry and Winnie. The images in this book are watercoloured and are well done. Now, to some telling history to children may seem hard or they may not get it. In the book it is like any other story, like in the book, one can have be any kind of story told to a child. It does not goes into long explanations of certain situations or detours to explain the history.

It makes the connection of Harry and Winnie and Winnie’s time in the London Zoo where A A Milne and his son visited to make the bear we know – who loves honey and lives in the Hundred Acre Wood.

This could open up a child’s interest in history (or just Canadian), and interest in animals or question what kind of stories their own family have. To me this book is lovely to have in your own library. It does come in hardcover, the paper cover and inner cover are both lovely pictures to look at and there is something nice about looking at the young bear that inspired many stories for years to come. Here is a bear that was saved by an animal lover, that captured the hearts of many more when Harry went to France and could not bring her back home when he came back to the zoo. He could not break the love and happy faces the children had, she brought them that like she did for Harry. So, in a way the rest was history for a good bedtime story.

Alexandra Roth
On YouTube – tarotundercandlite, I like tarot decks post Waite and that are not multimedia/collage, love the shadowhunter world, reading Jodi Picoult, having a candle lit.

“Finding Winnie: the true story of the world’s most famous bear