with Illustrations by David Vincent Dorn

Meet Felipe Femur, the skeleton with a lot of heart. He lives in a closet where he has lots of fun. But there’s an awful feeling growing in his heart. Join Felipe Femur on his quest to defeat boredom and loneliness, while finding happiness. Read along as he learns something new about himself and 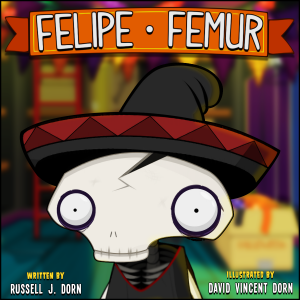 meets interesting monster friends, including a hungry toothless werewolf, a sun loving vampire, and a not so wicked witch in the middle of boiling up some gross green stew in her cauldron. Felipe Femur, Gummy Garou, Runny Rotten, and Sunny Stoker can’t wait to have you as a guest in their closet, fallen moon crescent, grotto, and tombstone homes. Like most skeletons in the closet, Felipe tends to stay hidden away. In other words, he’s usually a lone wolf, as his friend Gummy Garou the werewolf likes to say. In his closet, Felipe loves to build things: forts, houses of cards, and he also loves to solve puzzles, but sometimes he grows bored of these things. On occasions he yearns for time with his friends. So he invites them over to pull up a coat hanger and hang out, or, as is the case here, he walks are Toonstone to find them. Being the health nut he is, Felipe loves to walk, and in doing so, he meets many new friends and old friends, too—ghosts, ghouls, banshees, and even a lagoon creature. Maybe someday, if you’re out and about, he’ll walk into you! Keep an eye socket out for a sequel about the Day of the Dead (Día de Muertos), which will be coming soon, as well as the Halloween (All Hallows Eve/ All Saint’s Eve) book with a full cast of characters that appear in the final scene of this book—costumes and all. Get ready to have your funny bone tickle in this happy little tale about a not so happy skeleton.

Russell J. Dorn is author of several young adult horror and children’s picture books. He is the co-creator of Felipe Femur, a free children’s website about a skeleton and his monstrous friends (www.felipefemur.com). Russell is a graduate of the University of Nevada, Reno. Visit his website for more information: www.russelldorn.com.