Elementals :The Prophecy of Shadows by Michelle Madow.

Elementals :The Prophecy of Shadows

It was a good introductory book to the series. It established their world and the dangers that they’ll face in the future into perspective without being 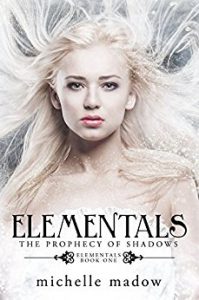 too revealing. The characters were well established so that the reader can root for them in the future.
The protagonist Nicole was a good choice as it gave us the explanations of their world from her POV as she also knew nothing. It covered everything that was needed to know for the first book but the climax was good enough to seem not too baiting for the future books. It honestly felt like a mashup of House of a Night series/Covenant series with the protagonist being the new girl and of Spirit element and all the demigods respectively. But it was fresh enough to stand on its own even with all the cliches like falling for the boy she’s  not supposed to fall for, knowing nothing but being amazing at it in the first try, prophecies and chosen ones.
All in all, it was a good read and I give it a 3/5.

Nicole Cassidy is a witch descended from the Greek gods… but she doesn’t know it until she moves to a new town and discovers a dangerous world of magic and monsters that she never knew existed.

When the Olympian Comet shoots through the sky for the first time in three thousand years, Nicole and four others — including mysterious bad-boy Blake — are gifted with elemental powers. But the comet has another effect — it opens the portal to another dimension that has imprisoned the Titans for centuries. After an ancient monster escapes, it’s up to Nicole and the others to follow a cryptic prophecy in time to save the town… and possibly the world.

Michelle Madow grew up in Maryland and now lives in Florida. Some of her favorite things are: reading, traveling, pizza, time travel, Broadway musicals, and spending time with friends and family. Someday, she hopes to travel the world for a year on a cruise ship

Aishwarya Girish. Is   from Bangalore, India.She has a Bachelors degree in Computer Science.  Currently she is pursuing her Masters in Computer Science at University Of Southern California. In her spare time, she watches TV shows and reads . She usually takes up books of the following genre – Paranormal Romance, New Adult and adult romance. Her all time favorite books are The Host by Stephanie Meyer, Pride and Prejudice by Jane Austen and the Harry Potter Series.
Visit her blog : aishwarya21blog.wordpress.com

From Dark To Light A Halloween story by Isabella Murphy