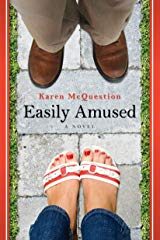 Karen McQuestion is an action writer. Her novel doesn’t have descriptions of car crashes or explosions or bombs, but something is always going on in each paragraph, moving the plot forward (or sometimes a bit sideways with the heroine’s philosophical musings on life). Written in the first person (as Lola Watson), sparks of energy fly off each page and we as readers really feel like we’re helping Lola get through the puzzle of her life.

The following are two examples of Lola’s ruminations. The first explains her tendency to be alone: “It’s an unfortunate quirk of my personality that I’ve always been easily overwhelmed. My parents had two daughters; me, the typical serious type-A older daughter who needs a lot of transition time, and my sister Mindy, who could throw a party on a moment’s notice. I’ve tried in the past to go against type without success. The truth of it is, I’m rattled by things other people take in stride. Knowing this, I arrange my life to avoid stressful situations. An unexpected visitor, even a good friend, feels like an intrusion.” The second talks about life’s unexpected difficulties: “Most things in life are more complicated than you’d anticipate. Like the first time I played a real game of tennis, which was in high school phys ed, embarrassingly enough. I’d seen tennis games before and even batted a ball around on the street with Hubert, but who knew playing an actual game would be so freaking hard? Apparently when I played with Hubert he’d been deliberately hitting the ball right to me, making me think I had this tennis thing down. After the first serve in gym class, I realized that tennis was far harder than I’d thought. It’s a whole other thing when people aren’t trying to make it easy.”

And who is Hubert? Hubert has been Lola’s friend since junior high, along with her girlfriend Piper (and Piper is now married to Mike and they have a baby named Brandon). Hubert gets thrown out by his current girlfriend, Kelly, and ends up at Lola’s new house, which she inherited from her aunt (including furnishings and, later, a diary Aunt May had kept throughout most of her lifetime) and in which Lola is now living while trying to avoid her neighbors. Brother Jasper is one of these neighbors (a kindly man who tries to help everyone out), as are Belinda (whose life seems to be centered around her dogs), Crazy Myra (who gardens and talks to garden gnomes), and Mrs. Cho and her husband Ben, who bring over Korean kimchi. Lola doesn’t want to get inveigled into helping out with the neighborhood block party, which is being given for the benefit of Derek, a little boy with leukemia.

And then there’s Mindy, who’s about to marry Chad and who resents Lola having been the older “perfect” daughter. When Mindy decides to have her wedding on Lola’s 30th birthday, Lola and Piper are incensed and devise a plot at one-upmanship involving the neighborhood’s mystery man, Ryan Moriarity, who’s exceedingly handsome.

Whenever you think that you know where the Karen McQuestion plot is going, think again, because it’s going somewhere else! Easily Amused is interesting and pleasant to read and very life-like in its twists and turns among life’s disappointments and joys. Written by one of our best new novelists with a unique voice that’s entirely her own and filled with humorous asides, make certain that this is one book you’ll have on your reading list this year!

Easily Amused, a novel by Karen McQuestion published by AmazonEncore in 2010, 286 pages.