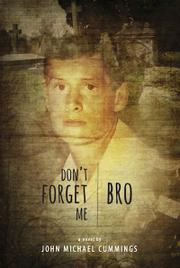 Mark Barr returns to his home town: Alma, West Virginia when his brother, Steve, (only 45 dies) dies of a heart attack.  Mark hasn’t been back home for quite some time because of bad memories of the past and has strong dislike of his father.  Mark also has another brother Greg and then there is his mother back in West Virginia.  The father in a book was very abusive to all three sons as they grew up.  The scars of the father’s abuse causes Steve: to have mental illness, causes Greg to become an alcoholic and causes Mark to be physically abusive to his girlfriend, (who he left behind for this trip and seeks separation from Mark).  Then you have mom who doesn’t do much to defend her sons with the father.  The abuse also causes Mark’s family to become alienated from each other.     Because of his painful memories of the past, Mark has wanted to be as far as away from his home town as he can.  Before Mark’s brother dies, he talks to Steve on the phone and Steve tells him:  Don’t forget me Bro and tells him that he wants to be buried next to Grandpa Roy.  Therefore, Mark returns home when Steve dies and tries to honor his brother’s wishes, however this is not easy.  There still is much tension between the Dad and the sons.  Mom just tries to be the peacemaker and tries to prevent the family arguments.  Many times,  Mom is on her husband’s side instead of her two living sons.   The father is still mean and spiteful towards his sons, often putting them down.  The family does not plan a funeral for Steve and prevents Mark from fulfilling Steve’s wish of being buried next to Grandpa Roy.   When Mark tells the family of Steve’s burial wishes,  Dad doesn’t honor the wishes as he is in disbelief that he actually knew what he was saying because Steve had a lot of mental illness.  Dad  also still has many cruel thoughts of Steve, even with him being gone.  Dad goes behind the two sons’ back and has Steve cremated.   The book unfolds with family alienation, family drama and Dad remains the man he always has been.

It took the family until the end of the book to finally come together and honor Steve.  There are things that the book teaches.  You see how the effects of abuse causes a host of other problems, such as mental illness, the cycle of abuse continuing with the next generation and different issues as having problems with Alcohol.  When Mark returns to his home town, he learns that he can’t run from his past and must face the emotional scars of the past head on, or else he will never move past his pent up feelings of the abuse.

The author did a good job with portraying the themes of mental illness, the cycle of abuse continuing and shows how families become alienated from each other.  I also think that the author made the characters come alive to the reader as you read through the novel.  The beginning of the book moved a little slow but then I was able to get into the storyline and wanted to know what happened next.  This book is very depressing and does not feature any happy moments.  I think the author should have put some kind of happy points or funny parts to break up the seriousness of the novel.  I recognize that abuse is a serious topic, but the book needed some sort of relief from the seriousness of the book.   The book also needed to show or needed to talk more about how the characters would move past their emotional scars from the abuse.  The book did not have many solutions of how Mark or Greg would turn their lives around and you did not see any sort of change with the Dad.   Dad remained the cold and abusive man that he always has been.   In my opinion, the book was an average book.