Book One in the Watcher Series by AJ Eversley

It’s many years after WWIII and Sawyer Russo has spent the last 10 years fighting the Bots and Carbons.   Sawyer has trained along side all her guy friends and they know her as one of them, a Watcher.  Sawyer is one of the best fighters on the base and her only mission is to keep humanity alive.  The enemy is out there trying to capture all the humans and they know him as the Commander.

Smith is the leader of Sawyer’s base and he has a mission for her and the other Watchers.  They have received word of humans being held captive.   Sawyer and her team must go in and save these humans before the Bots and Carbons see them.  Each team member has a certain job to do on this mission and a certain amount of time to retrieve the people and get them back to the hidden base before they are all captured. 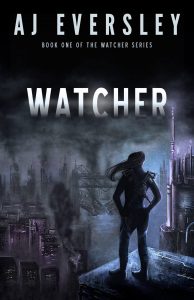 taken out but, are harder to kill than the Carbons.  Carbons look like real humans, but the difference is they don’t bleed.

Sawyer and her team begin their mission and just as they getting everyone out Sawyer notices a man and an elderly woman being left behind.  Sawyer tells him to leave the woman who can’t walk on her own or they will be killed, but the man refuses so, Sawyer goes back and helps the man get the woman out.  It is hard to carry her and they must do it quickly because the enemies is already on to their presence.  But, they make it and during the process because of the hold up , one of Sawyer’s best friends, Kyle, is shot and severely injured.   Kyle is like a brother to Sawyer and all she has left in this world.

Sawyer soon finds out the man she rescued is named Kenzie and even though she blames him for Kyle’s near death, somehow she is physically attracted to Kenzie and feels a deep connection with him.

As the book goes on,  Kenzie and Sawyer fall in love, but deception and the safety of the humans on Sawyer’s base are in jeopardy of being killed due to a spy in the mist.  I don’t want to give away the future happenings of Sawyer, Kenzie and the others because it would ruin the ending for you, but I will say there are many twists and turns and people who are not who they claim to be and the quest to keep humanity alive becomes harder and harder.

I love this futuristic book and it is written with so much excitement you will not put the book down until it’s finished, or at least I couldn’t.  It is the first part of a series and I am so excited to read the next part.  I highly recommend you read “Watcher” !

Content Rating: PG (​No swearing or explicit sex scenes…there are kissing or romantic scenes that are considered PG. The word Hell or Damn is used only a few times.)

“I knew I was not alone. They would never leave until every last one of us was gone.” Sawyer Russo has sworn to protect humanity, and as a Watcher she’s done just that. But the Bots and Carbons that took her city are evolving, and they start picking the Watchers off one by one. One last rescue mission will change everything. When someone betrays them, the line between friend and foe is no longer easily drawn. Sawyer made a vow, and she will fulfill it, even if it means ending the person who deceived them, no matter who it might be. It all comes down to one choice… Who can she save? And who does she have to let go?

AJ Eversley is the author of the WATCHER series. A true north Canadian girl, AJ currently lives in Central Alberta with her husband and dog. When she’s not writing, she can be found binge watching Harry Potter, quoting various movies in every day conversation, and eating copious amounts of candy.
​
Connect with the author: Website ~ Twitter ~ Facebook ~ Instagram