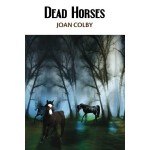 Vintage tales of hardship and survival:
Grandad crushed when the tractor toppled
On Brier Hill. How Uncle John lost his arm
To the picker. Samuel smothered
In the silo, lungs full of harvest.

Thus reads a stanza of the poem Farming – One of the most dangerous occupations. It is representative of the twenty-six poems in Dead Horses, poems of struggle and suffering, loss and death. These are poems of memories, especially memories of horses:

Now that they are dead or gone, the dream
Is always of a field where horses
Flash past, hooves catching and echoing light,
The grass lush, milkweed or Queen Anne’s lace
Along the fencerows. Then suddenly it’s winter,
Snow is falling, shapes are haloed, the sky is bleak.

And another stanza, from the same poem:

…..You want them now, those horses
Crashing the earth with sound as if light
Had been surpassed by speed, as if the laces
That bind you to your bones gave way to winter’s
Blast…..

(from the title poem, Dead Horses)

These are poems of the earth and its creatures, about farming and colts and owls and trying to make a living as a farmer, about a witch horse

who “……cracked/Your sternum when you were /tailing her as I drew blood” (from Witch), about barn fires and drowned kittens and poisoned crows. These are the poems of the weathered and experienced, as opposed to

Young, I wrote
Poems as harsh and fierce
As ice on barbed wire, feared
Nothing more than sentiment,
A fatal softening like rot
In an onion or the lethal odor
Of cut flowers left too long.

It takes almost a lifetime to learn
Heartlessness is no armor at all.

Anyone who has ever lived in the country will love these poems, as will city dwellers longing to learn about nature’s harsh magic. It’s where one must have a steely temperament, as “we sent the cattle to slaughter rather than have

them die of thirst” (from Drought) and “a dog crosses/the road purposefully, carrying something dead” (from Western Minnesota). We are also told about

“…..the man, a week ago,
Who, seeing ducklings on the tollway,
Left his car running and rushed
To their rescue. He was hit
Almost at once, then hit again.”

Dead Horses is a book of poems about those who go on, no matter what happens, those who keep working to support the constancy of life, those who posture “furiously against tomorrow” (from Two Deaths). The world goes on and the strong go on with it, through death and hope and toil and dream, as Joan Colby brings all of these efforts up to the light in her poems for a passionate and acute examination of the human condition.

How to Help Your Teenager Overcome Addiction