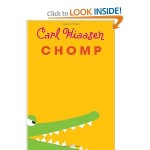 “The first time Mickey Cray got chomped, he was only four years old.

“His mom (Wahoo’s future grandmother) was sweeping the patio

when she let out a yell . Mickey ran outside and found her waving a broom at a small garter snake, which he promptly snatched by the tail. The frightened reptile twisted around and sank its sharp little nippers into Mickey’s tender wrist.

“He just stood there, staring in wonderment. It was just about the coolest thing he’d ever seen.”

Mickey Cray advances to chase “snakes, chameleons, turtles, toads, eels, even baby gators”, and he marries a woman, Susan, who doesn’t mind his “passion for wildlife.” He has a son that he names Wahoo, after a wrestler (although people think he’s named after a type of fish). He keeps all of his critters at his farm in Florida, and rents them out to movie and television studios, going along to “wrangle” them and make certain that they aren’t harmed. His son Wahoo has a missing thumb from an encounter with one of their reptiles, and helps his father constantly, especially when he’s been hit on the head by an iguana falling from a tree and sees double. His mother, Susan, has to go to China to teach English so that their bills are paid. Wahoo is the protagonist of the story, helping his father with an Expedition Survival! TV series starring Derek Badger (formerly Lee Bluepenny, an Irish folk-dancer), who fakes his way through survival in the wild all over the world. Adventures on-location in Florida’s wilderness and bringing along Tuna, a girl from his class in school who’s abused by her drunken father, keep life exciting for Wahoo all summer.

We are told that Carl Hiassen “has been writing about Florida since his father gave him a typewriter at age six,” and that his first novel for young readers received many awards, including the prestigious Newberry Honor Award. His portrayals of landscapes and animals and human nature are varied and oft-times hilarious. The pompous Derek Badger character is bitten on the tongue by a bat (as he pretends to eat it) and his tongue swells enormously, and in the delusion of his infection Derek thinks he’s turning into a vampire.

Chomp is an enjoyable read not only for children but also for adults, a page-turner with its inherent family loyalty and feeling of familiarity: Wahoo, Mickey, and Susan are easily characters all of us could know (except for their connection with reptiles and animal wrangling, which is

exotic and curious). One feels for Wahoo, with his odd name and his deep concern for his father who doesn’t socialize much outside his family, and his care for Tuna and her difficult situation. Chomp is also a high adventure story with people getting shot and possibly killed as Mickey and Wahoo just want to do their job and are constantly startled at the low morals of money-greedy television employees from Expedition Survival! One couldn’t ask for a more pleasurable reading experience!