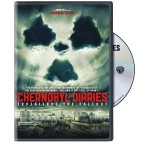 Chernobyl Diaries (released by Warner Bros. Home Entertainment in a Blu-Ray Combo Pack on 10-16-12 and including a DVD and an Ultra Violet Digital Download) was written and produced by Oren Peli (known for the film Paranormal Activity). Chris (Jesse McCartney) and his girlfriend

“We are young, we are free…..we’re alrigtht” as they pose in front of normal tourist attractions like the Tower of London or the Danube River. The trio visits Chris’s brother Paul ((Jonathan Sadowski) in Kiev, where he’s been living for many months and loving it. But what happens when the young and the free meet history and another era’s destiny?

Instead of showing them Moscow, Paul decides to take the “kids” on an Extreme Tourism trek to Pripyat, near Chernobyl, the site of the nuclear reactor disaster 25 years ago. Uri (Dmitri Diatchenko), their independent guide, tells them that “this is a very special tour” as Zoe (Ingrid Borso Berdal) and Michael (Nathan Phillips), two other young travellers, arrive to join them. Uri states that “nature has now reclaimed its rightful home” around the city of Pripyat where the families of the disaster workers lived, and that it’s safe there for a tour of only two hours. They ride in Uri’s van to a checkpoint but are stopped by an armed guard in a red beret who denies them access because “maintenance is going on.” But Uri claims that “there’s more than one way to play this” as he drives them to unguarded entrance of the Exclusion Zone while one of the girls notes that “It’s so bizarre, you don’t see any birds or anything.”

May Day, the celebration of spring in Pripyat, never happened that fateful accidental year a quarter of a century ago, but we can see an old abandoned Ferris Wheel that had been set up for the festival. Deserted factories, schools and homes appear eerie as they tour in absolute silence, finding a dead animal in a doorway and climbing stairs to apartments where “the people were not even given five minutes to vacate” and their possessions were sold on the black market to buyers who later became ill from radiation. Uri gestures to the others to be quiet as he hesitantly walks ahead of them – and then a bear gallops through a hallway, roaring! The group decides their adventure is “pretty exciting” and will make a great story, and everyone is happy to be leaving Pripyat.

But then Uri’s old van won’t start and Uri says “The wires have been destroyed.” They are all stranded in Pripyat and no one knows they are there. At nightfall there are gunshots and “people” running through the woods.

Chernobyl Diaries is especially cinematically beautiful scanning Pripyat’s city ruins at night in an almost black-and-white rendition that regains color as terror strikes. Will the couples’ newly-acquired guns and flashlights save them – and from what? A strange foreign culture, dead bodies hanging upside down, “people” slipping in and out of sight and shooting – will the six survive their spur-of-the-moment lark? A blend of the real and the unreal and quite a thriller, especially for fans of this genre.

by Brooke LaDue
No Comments