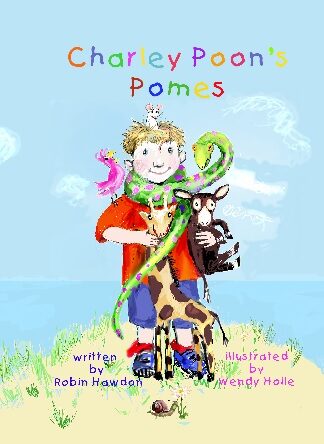 Unable to find good funny poems to read aloud to his grandchildren – other than the seventy year old A.A. Milne classics – British playwright Robin Hawdon sat down to write some himself. The result is this collection of thirty hilarious and touching poems, beautifully illustrated by Wendy Hoile, which recount the exploits of young Charley Poon – every parent’s nightmare – and his eccentric menagerie of nursery animals. The poems cover everything from youthful games and exploits, to the problems of growing up, to the ups and downs of school and family life, and the joys of country and seaside holidays. Parents and grandparents will be delighted to have something new and entertaining with which to occupy those tricky lights-out bedtime moments.

It’s always fun to find a book like this. Not your everyday story book but a book of Poems or Pomes as Charly Poon would say. Charley is a little boy and if you wish to know more about Charley you can read all about him in this story. His likes and dislikes,all about his friends (his pet Mouse Snouse).

The book is loaded with cute, fun “Pomes” that are always more fun if read aloud. My favorite I think is titled  SPELLING. It show how strange the English language actually is.

The artwork was done by  Wendy Hoile and she did a great job with bringing the Pomes to life. The expressive and colorful animals will make any child smile. The book was written by Robin Hawden and he makes you think there really is a Charley Poon

I had never written for children until recently and very late in my career, which has always been concentrated on stage plays and the occasional novel, all ranging from comedies to serious scientific subjects. However when grandchildren came along and reached the age when they could appreciate bedtime stories I remembered the hilarious times I had with my own children at that age, when we would all be weeping with laughter at the wonderful A.A. Milne stories and poems (the adults often more than the kids). 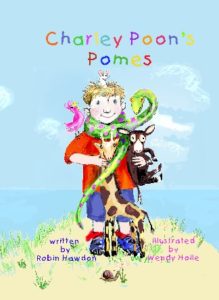 When I went looking for the equivalent stuff to enjoy with the next generation I found that, apart from all the best selling picture books with which they were well familiar and which relied as much on the illustrations as on the stories, there was nothing to equate with the sheer wit and joy of those ninety year old Milne classics in which Christopher Robin and Pooh and Piglet and all their friends experienced such splendid adventures in their magical forest world. Modern books of children’s poems in particular were mostly simplistic and woefully short on the sort of wit and imagination which illuminated ‘Three Cheers For Pooh’ for instance, or ‘Waiting At The Window’.

So, as I was between adult projects and wondering what to write next, I began to dabble with the odd idea myself and came up with a poem or two which at any rate made me smile, and when I read them to the grandchildren found that they went down well. Eventually over several years they grew into a collection of around thirty poems, and then a superb artist friend, Wendy Hoile, agreed to do some illustrations, and so eventually they got published as the book ‘Charley Poon’s Pomes’ (sic).

There is no question in my mind that the earlier children, even toddlers, are made familiar with the printed word, often embellished with illustrations, the greater will be the effect on their own creative minds and imaginations, and ultimately on their entire educational process. I can still remember vividly the effect of my mother reading to me those early children’s books which awakened in me such thrilling imaginings, and which as I got older led to progressively more advanced stuff such as ‘Wind In The Willows’, ‘Swallows and Amazons’, ‘Just William,’ and on into adult literature. I wonder whether my education and indeed my own career would have progressed as it did without those very early revelations and stimulations.

The surprising thing about Milne’s stuff is that children get the humour so early on. Yes, the idea of Pooh getting stuck in Rabbit’s front door because he’s eaten all the honey, or the idea of making a Pooh trap for Heffalumps, might seem fairly obvious concepts (although not many writers could have come up with them), but what really makes them so unique is the humour in the language and dialogue. As a playwright I can really appreciate that, and time and again when reading the stories I have thought, ‘Wow, I wish I had written that!’

Nowadays children are introduced so very early on to the huge distractions of the smart phone and the internet, where everything is rushed, everything including language is abbreviated, everything is about mundane matters and everyday concerns. I have serious worries when I see every other teenager in the street or the café glued to their screens, hypnotised by their Facebook or Twitter messages, addicted to their photo collections or their video games. What is this doing, I wonder, to the growth of their individual imaginations, the development of their creativity? How does this effect their knowledge of the English language and their ability to describe sophisticated concepts in an increasingly specialised professional world?

Would they understand this:-

‘Suddenly Christopher Robin began to tell Pooh about some things: People called Kings and Queens and something called Factors, and a place called Europe, and an island in the middle of the sea where no ships came, and how you make a Suction Pump (if you want to), and when Knights were Knighted, and what comes from Brazil. And Pooh, his back against one of the trees and his paws folded in front of him, said “Oh!” and “I didn’t know,” and thought how wonderful it would be to have a Real Brain which could tell you things. And by-and-by Christopher Robin came to an end of the things, and was silent, and he sat there looking out over the world, and wishing it wouldn’t stop.’ 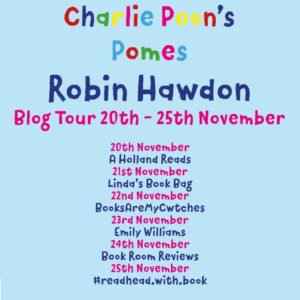 The Most Ferocious of Creatures; by Chris Sykes – a Book Review