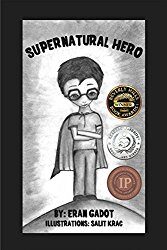 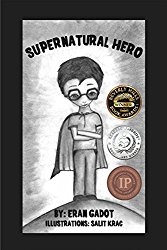 ry to be someone else, be yourself!
Reading this book will make you see that being yourself is the only way
for success, all you need is to believe.

Andy is the nerd everyone makes fun of. He’s really skinny, wears glasses and talks to himself, but he falls in love with the prettiest girl in the class. One day Grandpa dies and turns into a ghost. Then, Andy discovers a new power, he can see ghosts and talk to the dead.
Join Andy’s journey and find out how a nerd can become a hero.
Supernatural hero is a great children’s book with an outstanding story, for the whole family to enjoy. This book series will stay with you forever. 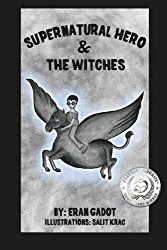 adot. If you are looking for a Children’s book full of action, mystery and morals, you must give it a try! Andy, just one year away from junior high, has become a school hero thanks to his supernatural powers and the funny, acrobatic ghost of his beloved Grandpa. He manages to defeat evil powers and witches, to break a dangerous magic spell, and to win the heart of the most popular girl in the class. “…Grandpa’s fighting the witches. He’s holding a shining spear in his hand and it’s shooting out multi-color laser beams. The witches are trying to attack him. It’s the first time I’ve seen a real supernatural fight… One of the witches is sneaking up on him from behind… At the last second Grandpa pivots, his spear connects with the evil black spirit and she gets smacked right out the window. Next I hear a bloodcurdling scream…” Supernatural Hero and the Witches is the newest in the series of suspenseful adventures about Andy, the boy who can talk to ghosts.

Supernatural Hero and the Zombies by Eran Gadot is a fun preteen book, book 3 in a series. We meet Andy again as he is getting ready to spend his

summer with Zoe. Andy’s ‘to do’ list involves things like going to the beach with Zoe, spending time with Zoe, and basically being with Zoe. This plan could go really well if zombies were not such a big problem. Andy can also talk to ghosts and his grandpa’s ghost takes center stage. Dealing with his grandpa’s death, Andy begins seeing his ghost. I found this to be an interesting way of introducing preteens to death, and also the message that those we love never truly leave, even though they do not stay around us as ghosts. Supernatural Hero and the Zombies by Eran Gadot is a fantastic preteen book. Dealing with a lot of themes from love and death to school and bullies, this is a well rounded book. As a adult, I decided to give this book a try because it sounded interesting and I was not disappointed. Andy deals with problems that most preteens would deal with, and I was able to relate in some ways to him. I enjoyed the pacing of the story and the humor within. The art work throughout is amazing. I found myself staring at the illustrations. I loved the way the pictures were pencil drawings and that added so much to the story. I feel that adults, teens, and preteens will be able to enjoy this series. Reviewed by Siobhan Quinlan for Readers’ Favorite (5 Stars)

Eran Gadot is an award winning author. Gadot is married and a father to three children and two cats. He is proud to have ADHD and loves the fact that writing is the only way for him to focus on one thing. In his younger years he owned Pet Coffee, the first coffee place for dogs and their owners. He then opened a new coffee place, No Bill, where customers were free to pay as they please. He was the co-founder and CEO of a small high-tech company which was later sold to Playtech.
He is currently one of the owners of an advertising agency, works as the head of the creative department. His love for sports got him to be owner of a sports live scores website and an enthusiastic tennis player. He also has helped producing several independent films.

The Cats of Laughing Thunder in The New Business Adventure