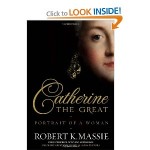 The last line of this historical tome reads “It was a long and remarkable journey that no one, not even she, could have imagined when, at fourteen, she set off for Russia across the snow.” And who would have known that Catherine the Great, ascending the throne at age 33 after the death of her husband Peter, would go on to espouse an enlightened autocracy in Russia and bring “philosophy, literature, art, architecture, sculpture, medicine and education” to her land, during a 300 year Romanov dynasty achieving as much as had only Peter the Great before he died (and equal to the British Elizabeth I of England). Yet towards the very end of her life she wrote about herself that she still liked to play children’s games like blindman’s bluff, and that she loved to laugh and she “forgave easily and hated no one.”

Author Robert K. Massie studied American history at Yale and European history at Oxford (the latter as a Rhodes Scholar), and won a Pulitzer Prize for his book Peter The Great: His Life And World. He brings a fine sense of detail, historical perspective, and human warmth and drama to Catherine the Great, making it enjoyable to read (with the length of the book necessary for its subject matter to emerge in its entirety). Catherine the Great (who never wanted this title but called herself Catherine II instead) is very real to us, with her rulership dilemmas (as all the empresses and tsars had) and her passionate love of her “favorites” after a marriage in which her oft-times ridiculous husband

Peter kept her a virgin for many years (when bearing a son as a successor to the throne was imperative) while playing “soldiers” in his rooms.

“At 2:30 a.m. on April 21, 1729, in the chill, gray atmosphere of a Baltic dawn, Johanna’s child was born. Alas, the little person was a daughter…..Johanna could not find or express any maternal feeling….the stark, underlying reason was that her child was a girl, not a boy. Ironically, although she could not know it at then, the birth of this daughter was the crowning achievement of Johanna’s life.” Catherine the Great was born Sophia Augusta Fredericka in northern Germany (her name being changed to the Russian Catherine when she became betrothed to Peter III), and her mother loved her far less than she loved the son she had after her, Wilhelm Christian, who unfortunately died at the age of twelve.

As “marriage was a minor princess’s only destiny,” Catherine (as yet Sophia) befriended Elizabeth, the new empress of Russia, through correspondence, and she was sent “a miniature portrait of Elizabeth set in a a magnificent frame of diamonds worth eighteen thousand rubles.” Frederick of Prussia, at age 32, also saw Sophia (then age 14) as a future political pawn. On Aug. 21, 1745, she married Peter Ulrich of Russia (an odd child-like fellow if ever there was one!), Elizabeth’s son, and during the betrothal had already been re-named Catherine after Elizabeth’s own mother.

It was a painful marriage from the very outset, with Peter declaring his love for other female members of the court yet not touching Catherine for years; Peter beating his hunting dogs and playing the violin; Catherine forbidden to write to anyone; and Elizabeth constantly demanding an heir. Finally when Catherine was 21, Sergei Saltykov courted her and she became pregnant twice (with a miscarriage each time), but she did finally bear a son, Paul, who was taken away by Elizabeth to raise by herself while Catherine was given 100,000 rubles which the Treasury of Russia took back for a time because of its debt. (Not exactly your ordinary life!) Not even allowed to hold Paul until a week after giving birth, “Through the next 42 years of their shared existence she was never able to feel or display toward him the warmth of a mother’s affection,” although she encouraged his marriage later in life and built a palace for him and his wife Maria.

After Elizabeth’s death and a strange rulership by Peter, Peter III finally abdicated the thrown in June of 1762 and Catherine became Empress of Russia. Years later, Frederick the Great said, of Peter, “He allowed himself to be dethroned like a child being sent to bed.” After a relatively comfortable imprisonment, Peter died at Ropsha of a “medical tragedy” (although many think that he was murdered) and, as Voltaire wrote, “When a heavy drinker dies of colic, it teaches us to be sober.” Catherine’s coronation occurred on Sept. 22, 1762 on the Red Staircase at Kremlin Cathedral Square in Moscow, and this was the beginning of a very great era both for herself and for her subjects.

Robert K. Massie’s writing style is inviting and compelling and always lets us see the human side of each finely-drawn character. What is it like to be a monarch, to deal with the Senate and rebellious insurrections, to be on constant call socially at masques and balls and to communicate with the finest thinkers and philosopher’s of one’s time? Massey make us feel what Catherine surely felt as a well-educated and inspiring voice and leader of many generations. Cahterine the Great is a memorable book that brings history to life and makes it our own emotional concern. Especially if you like history, you must read this book and immerse yourself in another culture and era!

Catherine The Great, a biography by Robert K. Massie, published on November 8, 2011, by Random House, 656 pages.

Christina Zawadiwsky is Ukrainian-American, born in New York City, has a degree in Fine Arts, and is a poet, artist, journalist and TV producer. She has received a National Endowment for the Arts Award, two Wisconsin Arts Boards Awards, a Co-Ordinating Council of Literary Magazines Writers Award, and an Art Futures Award, among other honors. She was the originator and producer of Where The Waters Meet, a local TV series created to facilitate the voices of artists of all genres in the media, for which she won two national and twenty local awards, including a Commitment to Community Television Award. She is also a contributing editor to the annual Pushcart Prize Anthology, the recipient of an Outstanding Achievement Award from the Wisconsin Library Association, and has published four books of poetry. She
currently reviews movies for , music for , and books for .

What’s the Deal With… Teens and Time Management?