This is what having an imagination is all about.  Who doesn’t remember trying to dig a hole to China when they were younger.  Sherry Ellis has written a juvenile story that answers this question in a way that is quite enjoyable.  This is a story of two children by the names of Bubba and Squirt who follow a dare of sorts and help to solve a mystery of Chinese heritage. 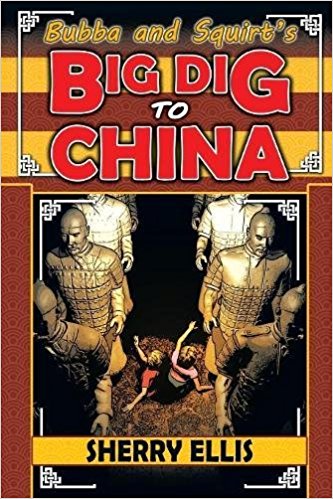 Sherry has written a book full of descriptive imagery for I could ‘see’ what was going on clear through this book for to a point it is true to fact, as in mentioning the ‘Terracotta Warriors’ for she even has a short chapter on the ‘Terracotta Army’ at the end of the book.  Also, as something extra Sherry included the recipe for Chinese Dumplings.  ‘Bubba and Squirt’s Big Dig to China’ is a way to teach diversity and maybe even start an interest in World history and the humanities. The glossary that Sherry included is great for this could increase further interest in language learning.

Sherry Ellis has written a work of children’s literature that may improve a person’s idea of what a Chinese lifestyle and heritage is all about. It is a book in the long run that could make children more culturally sensitive to others no matter who they happen to be.

A five star read for the cover illustration made me read the book.

Squirt doesn’t believe Bubba can dig a hole to China. But when the hole swallows them, the kids find themselves in Xi’an, China, surrounded by Terracotta Warriors.

It gets worse when the ghost of the first emperor of China appears. He tells them they can’t go home until they find his missing pi. The kids don’t know where to begin until they meet a girl and her grandmother who promise to help find the pendant.

Soon they realize they are being followed. And they are no closer to finding the missing pi. Will Bubba and Squirt ever make it back home?