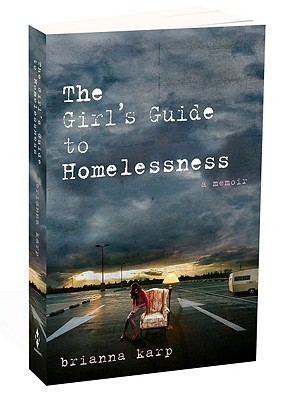 The Girl’s Guide to Homelessness: A Memoir

ever read (and therefore not for the faint of heart). In her no-holds-barred manner and seeking to show the universality of her experience, Ms. Karp presents details of her sexual abuse by her birth father, extensive physical abuse by her mother, her disconnection with her sister Molly (partially caused by the strictures of Molly’s belief in the family’s religion, Jehovah’s Witnesses), and Brianna’s romance with an Englishman that she met online. After losing a good-paying executive job and her current boyfriend Dennis plus her new home in Costa Mesa, California (because she couldn’t pay the mortgage because she’d lost her job), Brianna is also ousted by her mother (with whom she’s staying temporarily) when her mother throws a somewhat bi-polar fit and so Brianna has nowhere to go but to the truck and trailer that her birth father left her after he committed suicide.

Showing astonishing and resourceful skills by using her laptop and cell phone, and with the help of her friend Brandon, Brianna discovers that she can park her trailer in a Walmart lot because the founder of Walmart, Sam Walton, was an avid RV fan himself and allowed overnight stays. Brianna realizes that she never noted the trailers in the corner of the Walmart lot even though she’d been there many times, and after questioning the manager she parks her trailer there, where she can even keep her huge Neopolitan Mastiff dog Fezzik for companionship and to help guard her. Diligently she applies for jobs everywhere, using a Starbucks in which to work on her laptop (where she also charges it, along with her cell phone), but the Great Recession has caused millions to be jobless and she has little luck. So she takes Fezzik to a park daily for exercise and uses a large battery-powered flashlight from Walmart to illuminate her trailer, being glad that she has a cell phone in case there’s a fire or in case somone wants to break in and rape and rob her, since she’d still be able to call 911.

“I wonder how many people like me are out here,” Brianna writes. “People who had the stereotypical idea of a homeless man or woman, who believed that it would not, could not happen to them. The truth is, we never know the whole story. We don’t know other people’s circumstances. You can speculate that the wino sitting outside the 7-Eleven begging for change is there because he’s too lazy or stupid or uneducated or selfish or mentally ill. But will we ever truly know? Look at me. I’ve worked hard all my adult life (and throughout my adolescence), sought out a college education and worked for corporations and executives, built a life and a ‘secure’ foundation to fall back on. Yet, here I am. So, now what?”

Urged by her friend Brandon to first start writing a blog on tips for surviving homelessness and then to gain followers on Twitter, Brianna learns more about the myriad of homeless all over the world, including those, like her, who at first rely on unemployment (until it runs out). Others are helped by homeless activists. Buying the cheapest gym membership she can find, Brianna showers there, and is always very hard on herself, pushing for more and more job applications and interviews. Obviously feeling that she’d never had a secure home as a child (with her mother making her drink liquid soap as a punishment for small infractions or beating her until she bled onto her desk seat at school, while her mother never hurt or punished her sister Molly at all), now Brianna’s aloneness is externalized as she continues in her barren and scarred life, and of course she is entirely open to being scammed by a man who’d given her the illusion of marriage and a future home, the American dream. Brianna gains a Twitter fan, Matt Brandon, who was formerly homeless himself and was now a homeless activist in England, on meds for being mentally ill, and he begins to woo her, wreaking havoc with her life for an entire year as he comes to visit her in America, where she supports him while working a secretarial job as they continue to live in the trailer. Then Matt gives her an engagement ring and returns to England, promising to marry her soon. The consequences of their liason are truly shocking although along the way, through her own initiative, Brianna gains publicity and an internship with an Elle advice columnist, and later an offer to write a book, which at least establishes her future.

Most people have not lived as abrasive a life as Brianna Karp, but she opens a door to begin to show us what it’s like for those who have, and she teaches us how not to be judgemental of others. I admire her courage in exposing her personal circumstances and innermost thoughts and fears in order to open our eyes to the realities of how many of us are living in the 21st century. Never perceiving herself as better than anyone else, Brianna Karp brings home to us what at any moment could happen to one of us too, given just a few quick life changes. 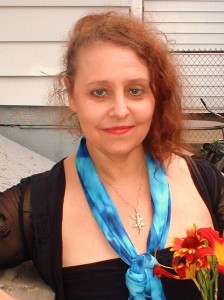 The Opposite of Spoiled; Raising Kids Who Are Grounded, Generous, and Smart About Money by Ron Lieber