Book Review Toward You A Novel by Jim Krusoe 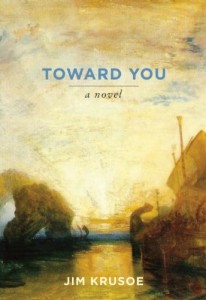 Toward You is about messages – but they’re messages that aren’t received, or if they are, their meaning isn’t clear. Bob receives a message in the form of a dog who arrives outside his house one day and dies, and has a tag around his neck with the name Bob on it, but what does this mean? Bob (the human) conjectures, as we all do when faced with what seem to be important symbols, but we’re not quite certain why or how. “Could Bob’s visit be a warning, like in that famous scene in the The Godfather where the horse’s head is left on the movie producer’s bed? Was someone or something telling me, ‘Hey pal, it’s time to wake up. Bob was alive. Now he is dead. You are alive, but how long do you think that is going to last? So carpe diem, Bob, if you get my drift?'”

Bob himself is trying to receive messages (from the dead) via a Communicator that he’s built. But the dead aren’t clear in their intent or even their speech, mostly sounding like static, if anything at all. Meantime, to support himself, Bob has an upholstery business, reincarnating furniture as new and transformed. But Bob is lonely, and one night, after having a dream “I got out of bed and walked into my living room, where I looked out the front window. Across the street a light went on. A man wearing pajamas and a robe appeared at his window and looked back at me. Had his dreams been strange too? Was he lonely? Did

he want to step into the street to have a late-night chat? After a few minutes his light went out, and his window was dark again. A street or so away, a car backfired. It was well after midnight, so I washed my hands, brushed my teeth, and this time finally stayed asleep.”

Luckily (or not) Bob has visitors from the past, in the form of Yvonne (a former lover who’d rejected him back in their college years when he’d taken a special seminar called Speed-reading with the Third Eye at the Institute for Mind/Body) and her young daughter Dee Dee. Yvonne was looking for a lost and possibly rabid dog who’d bitten Dee Dee, and Bob (the human) wonders if it could be the same dog he’d decided to bury in his back yard? But Bob still has feelings for Yvonne so he doesn’t mention Bob (the dog), and instead is a good host to the mother and daughter, offering them yellow cake that he’s baked and telling them about his new business. Bob hands Yvonne his BOB’S UPHOLSTERING, Recover the Past business card. When they leave Bob goes back to his work on the Communicator.

Bob is particularly intuitive and endearing in that he’s not very technological about his device and “….I could hear nothing that sounded in the least like a dead person talking, only the usual – static and clicks – no advice, no cries for help – nothing. Sometimes I took it to bed with me and lay next to it, as if it were a wife, until I fell asleep. I couldn’t even say what I was expecting.” But Bob does expect something to happen, in between watching television and talking to the dead buried Bob (the dog) in his back yard. Finally he decides that “At least walking was a plan” and he walks “alley after alley” in his city of St. Nils, until strangely he comes across an apartment where he sees Yvonne through a window sitting at her kitchen table. Of course a policeman with the name tag of Steadman finds his perch on a trash can akin to being a prowler, but then begins a conversation with Bob by asking him, “Tell me, do you ever get lonely?” Bob refrains from telling him that he’s so lonely that he’s been trying to communicate with the dead. And Steadman, confiding in Bob, asks, “Do you have any idea what it’s like to have to drive around the city alone night after night, the only individual awake when practically everyone else is sleeping, including the real criminals, those very people who in general are at the heart of ninety-nine percent of your gun battles and hostage situations?”

Yvonne continues to have problems, Bob gets into more trouble, and Dee Dee and Bob (the dog) have their own adventures (if they can be called that). Officer Steadman keeps driving around in the dark and Bob (the human) adds a helmet to his Communicator. And where does this get everyone? “Through me,” (the Communicator seems to “radiate” to Bob) what was lost shall be found; through me thou shalt go from life to death and then return again. Nice work, Bob, though it certainly took you long enough, I’d say.”

Jim Krusoe has created a world where everyone keeps trying to talk to everyone else (about themselves), but they often fail (because no one is really listening). Because of these failures there is a high amount of miunderstanding, lost love, and misdirection. When the Communicator finally works it is almost too late – or is it? “If anyone is listening, please hurry,” says Dee Dee – but is this enough to save them? In Toward You, as the Sufis say, the secret protects itself, and all the mysteries remain mysteries – which is perhaps as it should be.

Christina Zawadiwsky is Ukrainian-American, born in New York City, has a degree in Fine Arts, and is a poet, artist, journalist and TV producer. She has received a National Endowment for the Arts Award, two Wisconsin Arts Boards Awards, a Co-Ordinating Council of Literary Magazines Writers Award, and an Art Futures Award, among other honors. She was the originator and producer of Where The Waters Meet, a local TV series created to facilitate the voices of artists of all genres in the media, for which she won two national and twenty local awards, including a Commitment to Community Television Award. She is also a contributing editor to the annual Pushcart Prize Anthology, the recipient of an Outstanding Achievement Award from the Wisconsin Library Association, and has published four books of poetry. She currently reviews movies for and , music for , and books for .

The Rushing of the Brook by Kansas Bradbury