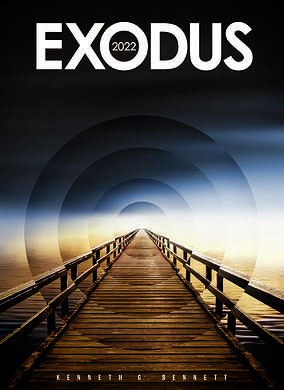 Sometime you read the summary or synopsis on the sleeve cover or the back of a book and think will this really interest me? When I read the summary EXODUS 2022 I was not sure about it. All I can say is do not DO NOT judge this book by the Blurb on the back about Joe Stanton going berserk about losing his Daughter.

Joe Stanton is in agony. Out of his mind over the death of his young daughter. Unable to contain his grief, Joe loses control in public, screaming his daughter’s name and causing a huge scene at a hotel on San Juan Island in Washington State.

Thing is, Joe Stanton doesn’t have a daughter. Never did. And when the authorities arrive they blame the 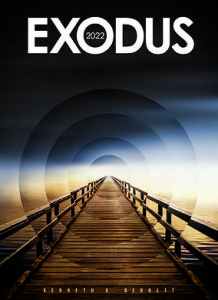 What they don’t yet know is that others up and down the Pacific coast—from the Bering Sea to the Puget Sound—are suffering identical, always fatal mental breakdowns.

With the help of his girlfriend, Joe struggles to unravel the meaning of the hallucination destroying his mind. As the couple begins to perceive its significance—and Joe’s  role in a looming global calamity—they must also outwit a billionaire weapons contractor bent on exploiting  Joe’s  new found understanding of the cosmos, and outlast the time bomb ticking in Joe’s brain. Is he losing his mind–or his world?

Although it does make you want to find out what is really going on in the book and sounds like it could be a fairly good read, It’s really so much more than that.Not having read the author’s ( Kennith G. Bennett) other books The Gia Wars and it’s sequel Battle for Cascadia I didn’t quite know what to expect.

EXODUS 2022  exceeded all expectations from the excellent writing, the character development, and especially how he put it all together to create a great story that keeps you riveted from the very beginning to the very surprising end.I really had no Idea how it would end . When I finished I thought of the ending of  Shawshank Redemption (it’s that good)

I’ve read plenty of Sci-Fi and Fantasy types before and you kind of know what to expect when you start one of those books but EXODUS 2022 is so very amazingly original in it’s concept and idea. I envy anyone with the imagination to come up with an Idea like this to base a book on. For the most part it’s actually very believable something like this could happen in the future.

Kennith Bennett fills his story with mystery,intrigue, a little bit of a love story mixed in, and never quite tells you more than you need to know at the time.His writing style reminds me of one of my own favorite authors the Late Tom Clancy although not of the same Genre the way he keeps you on your toes and wanting more with plenty of action .What starts out as a weekend get-away for Joe Stanton and he Girlfriend Ella turns into  a life or death  chase as they try to stay a step ahead of the bad guys chasing them not even knowing why they are in jeopardy .All the while Joe cant decide if he’s going crazy or not and why he’s hearing a voice in his head.

I’d love to give you more of the story because it’s just so cool the way it all unfolds.But if you read my reviews you know I don’t like Spoilers. Let’s just say if you like a good mystery or sci-fi or a good villain or a book with lots of surprises , a good chase then you’ll love this one . I zipped right though it. Enjoyed it thoroughly.

This book can be found —>Amazon

Magic of Friendship: Book one: How Andy-Dog & Katie-cat met by Tally Banana

The Nocturnals   The Chestnut Challenge