An interview with Karen McQuestion 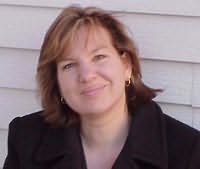 Karen McQuestion is the talented author of two recently published books – Favorite and Life on Hold. Christina Zawadiwsky recently had a chance to pose some questions to McQuestion to gain some insight into her books and her life experiences that contribute to them.

Christina Zawadiwsky: How do you conceive of your heroines (and heroes) and do they speak in your voice?

Karen McQuestion: I try to give my characters their own unique personalities and voice, but some of me sneaks in on occasion. I have a tendency to be sarcastic, and when I first wrote fiction, each of my main characters was over-the-top snarky. I’ve learned to tone it down considerably, but every now and then a bit of sarcastic dialogue does creep in.

As for how I conceive of my characters, it comes in stages. Usually I get an idea involving a person in a certain situation. As I write, I feel my way through the scene. The act of writing fiction often feels the same as remembering to me. Sometimes I’ll go to bed at night stuck at a certain point in my novel-in-progress (maybe even a little panic-stricken), and in the morning I’ll “remember” what happens next. I suspect my brain is working overtime.

CZ: You’re obviously interested in the family, as each novel has had families with missing components and its characters have to grapple with those losses. Do you think that the root of this is sociological – that nowadays there are far more families that have lost various members (through divorce, illness, or tragedy)?

KM: Good catch! I didn’t notice all the missing parents in my books until after I’d used this theme three or four times. I’m not entirely sure why this keeps coming up in my fiction, but I’ve looked for it in other novels and it’s fairly common. In Little Women, Jo’s father’s is off at war, in Harry Potter, Harry’s parents are dead, in Twilight, Bella’s parents are divorced and she lives with her dad. I could go on and on. For whatever reason, the theme of family loss resonates with readers and makes for a more interesting story.

CZ: I notice that the females in your novels often have to rely more on themselves than on help from their male counterparts – do you think this is also a post modern trend?

KM: I’m not sure if it’s a post modern trend or just a societal norm, but it’s always been my belief that women/girls can and should be able to handle their own problems. In fact, I find it amusing when women are referred to as “the weaker sex” because in so many areas, the opposite is true.

CZ: Are women becoming more independent and able to devote themselves to their families while retaining their individuality?

KM: To a certain extent, yes. Although teenage girls today will have more life choices than ever before, there’s no getting around that having kids requires putting your wants and needs on hold to a certain extent. The good news is that today’s young fathers appear to be more involved with the day-to-day care of their kids, which is a win-win for the whole family, especially the mothers.

CZ: In Life On Hold the mother, Gina, travels around as she would like to do, but also has a series of eventually inappropriate boyfriends – is this bad luck, or the cost of her freedom?

KM: I think it’s a result of poor choices. The men she’s attracted to are bad boys, and while that can be fun, they aren’t the type of guys who are in it for the long haul.

CZ: What do you think your novels teach young women about finding their place in the world?

KM: My biggest goal in writing is to tell an entertaining story. I also hope readers can empathize with the main character and realize through her, that most problems are universal. We’re all making it up as we go along and even the most self-assured, successful person has problems. Everybody’s got something. One of our biggest challenges in life is dealing with our something.

CZ: How do you create such great, natural-sounding dialogue?

KM: Thanks for saying so! Some of it comes naturally, but I admit to reading pages aloud

and doing a fair amount of rewriting as I’m revising.

CZ: What do you use as a starting point, when you first begin a book?

KM: I always start with one person, and one situation. Then I try to inhabit that person and write the scene from the inside out. Usually I come up with a name and a sense of their personality and back story, but not always. Sometimes that comes later. I don’t outline. For me, writing is about discovering the story as much as it is writing it.

KM: I don’t consciously model characters on people I know. More often, as a writer, I recognize types and incorporate that into my work. Everyone knows people who seem naturally happy (or naturally grouchy), people who are impulsive, over-talkative, chronically worried etc. People generally have defining universal characteristics and in that aspect, I do draw from life.

KM: Sweet freedom! I’m so glad I don’t have to drive to an office or a store or whatever and do designated work. For me, writing is the best job in the world. I’m a bit of a hermit by nature, so the solitude doesn’t bother me. I love creating fictitious worlds and events. It reminds me of playing with dolls or action figures when I was a kid and saying to a friend, let’s say that the kids are alone because the parents died of smallpox and the house is surrounded by vicious wolves……

An Interview with Brianna Karp